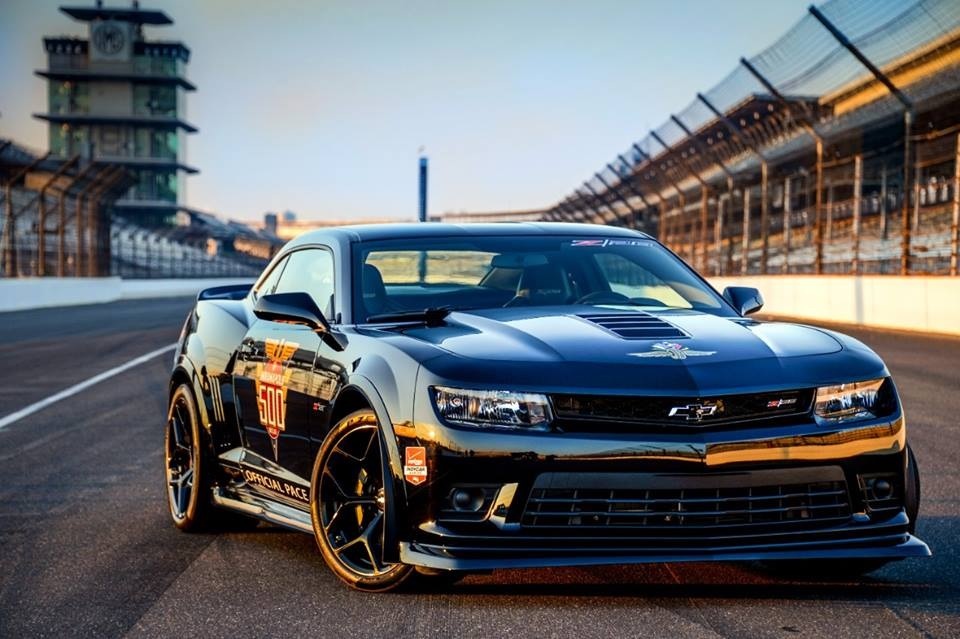 It’s the eighth time a Camaro has been the pace car, starting in 1967 – and the 25th time a Chevrolet has paced the race.

Franchitti won the Indy 500 in 2007, 2010 and 2012, and he is only the third driver ever to win at least three consecutive IndyCar titles – among four championships overall. Franchitti’s appearance in the Camaro Z/28 pace car signals a new start in his career as he embarks on a driver development role with Chip Ganassi Racing, which will use Chevrolet power in the 2014 IndyCar season.

“Dario is a true champion who has earned the respect of competitors and race fans alike,” said Jim Campbell, Chevrolet U.S. vice president of performance vehicles and motorsports. “It will be very special to have Dario lead the field to the green flag in the Camaro Z/28 at Indianapolis Motor Speedway.”

Said Franchitti: “It is a tremendous honor for me to be asked to drive the Pace Car for the Indianapolis 500. As a historian of motorsport and as a three-time winner of this great race, I will appreciate every minute of getting to pace the field in the new 2014 Chevrolet Camaro Z/28. Although I won’t be competing in the Greatest Spectacle in Racing, this will be as close as one person can get to the action. I can’t wait until May in Indianapolis.”

“We are excited to have Dario Franchitti lead this year’s Indianapolis 500 starting field to the green flag,” said J. Douglas Boles, president of Indianapolis Motor Speedway. “Dario’s appearance in the Camaro Z/28 Pace Car will be special for race fans and it underscores Chevrolet’s important place in the past, present and future of the Indianapolis 500.”

Chevrolet competed in Indy-style competition as an engine manufacturer in 1986-93 and 2002-05 with V-8 engines, and returned in 2012 with the Chevrolet IndyCar twin-turbo V-6 engine with direct injection. Tony Kanaan won the 2013 Indy 500 in his Chevrolet-powered race car, leading Chevrolet to seven of the top 10 finishes – including the top four. Chevrolet also earned the IndyCar manufacturer championship titles in 2012 and 2013.

About the Camaro Z/28

The 2014 Camaro Z/28 is the most track-capable model in its history, building on the legacy of the original SCCA Trans Am-series contender introduced in 1967. It is solely focused on track capability, with unique exterior elements designed like a race car to produce downforce that presses the car against the track for greater grip – up to 1.08 g in cornering acceleration – and faster lap times.

The aerodynamically optimized design helped the Camaro Z/28 log a 7:37 lap on Germany’s legendary Nürburgring road course – four seconds faster than the Camaro ZL1 – and faster than published times for the Porsche 911 Carrera S and the Lamborghini Murcielago LP640.

Power comes from the 7.0L LS7 engine, with dry-sump oiling, rated at an SAE-certified 505 horsepower (376 kW) and 481 lb-ft of torque (652 Nm). The engine is built by hand at the new Performance Build Center within GM’s Bowling Green, Ky. assembly plant.