A Generational Thing: Camaro Design through the Years 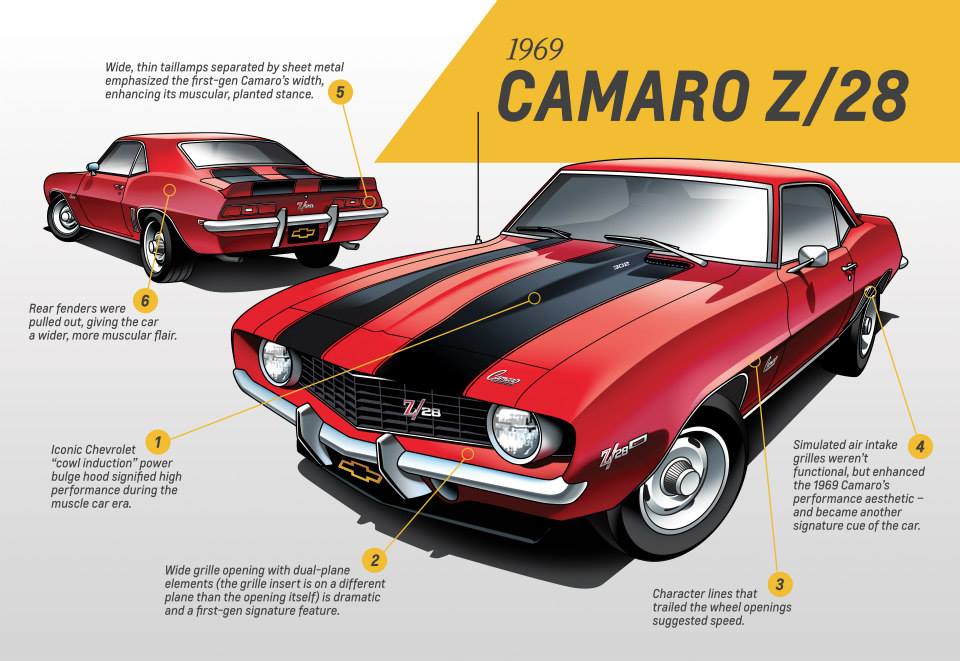 A Generational Thing: Camaro Design through the Years
CamaroNews Team

CamaroNews – Today Chevrolet released this GM press release that had reflection on the past 5 Generations of Camaro. You can bet they are getting ready for something big this spring. All speculations points to April, May or June in the public seeing the next generation Camaro. This week Chevrolet announced that the would idle the GM oshawa plant due to 161 day inventory over flow. We will have to wait and see, until then here is the press Release.

DETROIT – As the Camaro rolls through the final year of its fifth generation, Chevrolet asked five designers who have contributed to the sporty car’s design to reflect on the styling legacy that helped create an icon.

“While Camaro has evolved with cultural and design trends, it has consistently represented the approachable, attainable sports car with an emphasis on fun that’s evident in its styling,” said Ed Welburn, vice president of GM Global Design. “As a result, each generation of Camaro has evoked an emotional connection with enthusiasts – connections spanning 48 years, and five generations.”

“The Camaro should not have been a design success, as it was based on an existing architecture and admittedly hurried to market to address the personal coupe revolution occurring with Baby Boomer customers,” said Welburn. “However, the first-generation Camaro delivered a pure, classic proportion that will forever be regarded as one of the best-looking cars of its time. It was very lean and muscular, with comparatively minor embellishments for high-performance models. That was in contrast to some of the brasher competitors during the muscle car era, and it has helped the first-generation Camaro maintain timeless good looks.”

The Camaro’s first generation lasted only three model years, but one stands out for Welburn: “The 1969 model is the iconic Camaro to me. From the dual-plane grille design and speed lines stamped into the fenders and doors, it was original and distinctive. It didn’t borrow from any other design and all these years later, it still looks fresh.”

Welburn’s design analysis highlights for the 1969 Camaro include: 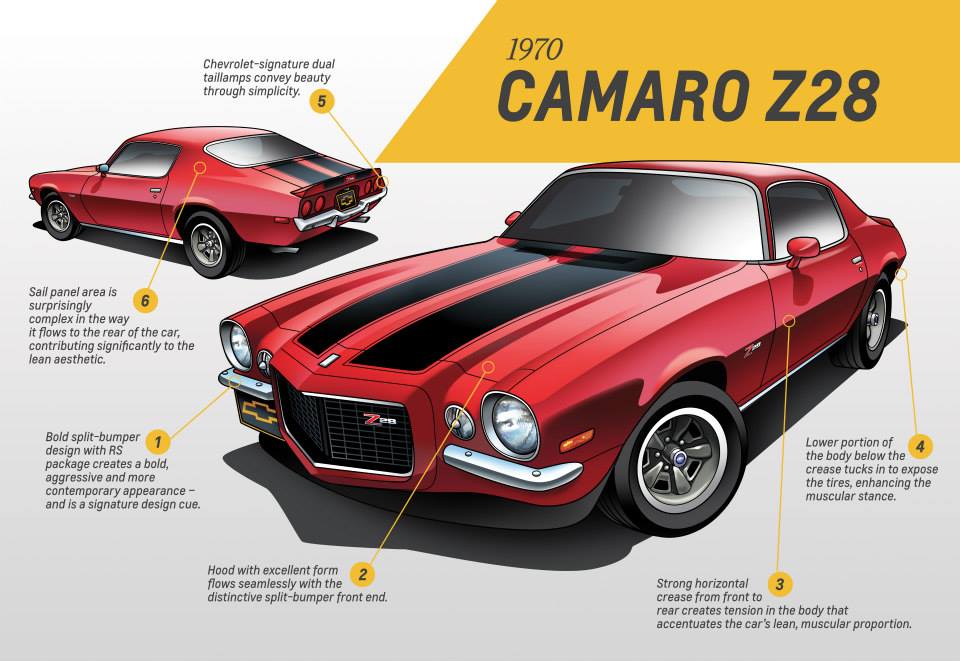 “I’ve always loved the ‘68 Camaro, but for some reason it was the second–gen car I’d find myself sketching during high school math,” said Parkinson. “It was a radical departure from the first-gen. For the first time, it was built on its own dedicated architecture, which gave the design team the freedom to create a pure expression. What that team created was a powerful expression of American muscle, influenced by a European grand-touring aesthetic. There was simply nothing else like it.”

As with the first-generation, clean lines and distinctive character traits contribute to the second-generation Camaro’s design legacy: “The second-gen car is pure Camaro, with a dramatic proportion and lean, muscular form,” Parkinson said. “You won’t confuse it with the first generation, but it is unmistakably a Camaro from every angle.”

The second-generation Camaro’s styling evolved during its 12 model years, including the change to soft, body-color fascias and a wraparound rear window. For his design analysis highlights, Parkinson focused on the early models, circa 1970-73, for their pure expression of the original design: 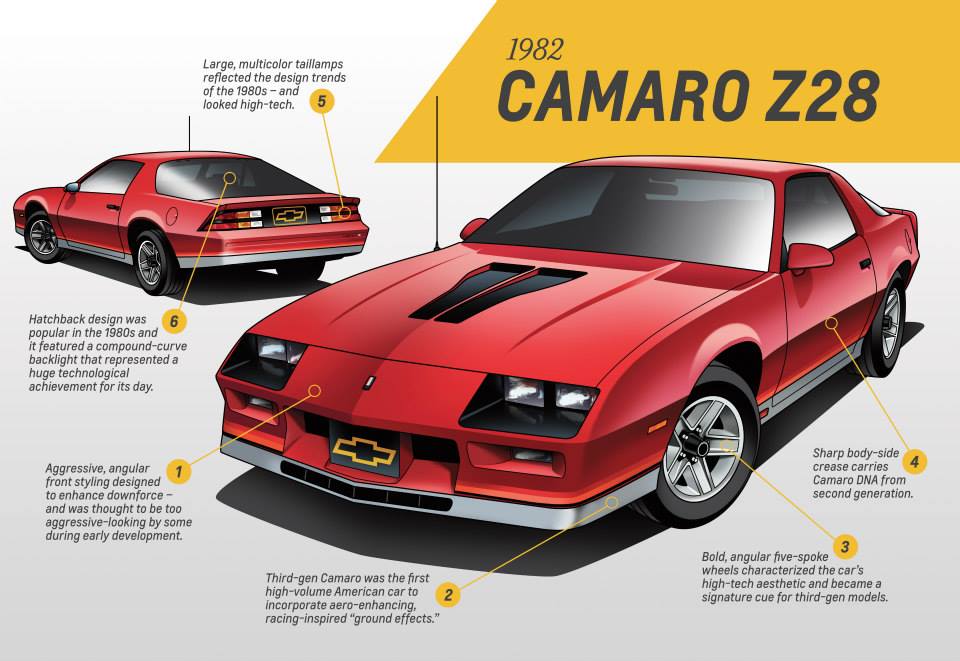 “The third-generation Camaro will always be a cultural symbol of the 1980s because its design epitomized the era’s high-tech cultural trends,” said Cafaro. “It also grew into more of a serious sports car and with that, its form was wrapped around a chassis system designed for a new level of function.”

To support that more performance-oriented mission, an aggressive front end designed to enhance downforce was styled for it. And for the first time, the Camaro was offered as a hatchback – another automotive archetype of the 1980s.

“The third-generation Camaro represented a distinct breakaway from the previous generations, which were undeniably influenced by European grand touring cars,” said Cafaro. “This was a uniquely American design with a form developed for function – and its aggressive front-end styling was deemed almost too aggressive by some in the company.”

The third-generation Camaro was also the first high-volume American car to incorporate aero-enhancing, racing-inspired ground effects, and its large backlight, which comprised most of the hatchback, represented a technological achievement for automotive glass production because of its size and compound-curve sculpture.

Customers and the media responded. Sales jumped 50 percent for 1982 and the Camaro Z28 was named the 1982 Motor Trend Car of the Year.

“Perhaps more than any other generation, the third-generation Camaro was a car of its time,” said Cafaro. “You can see that influence in every detail of the car, from the aerodynamic details of the exterior, such as the ground effects on the Z28, to the introduction of digital instruments on the interior.”

Cafaro’s third-generation Camaro design highlights include focus on the 1982 Z28: 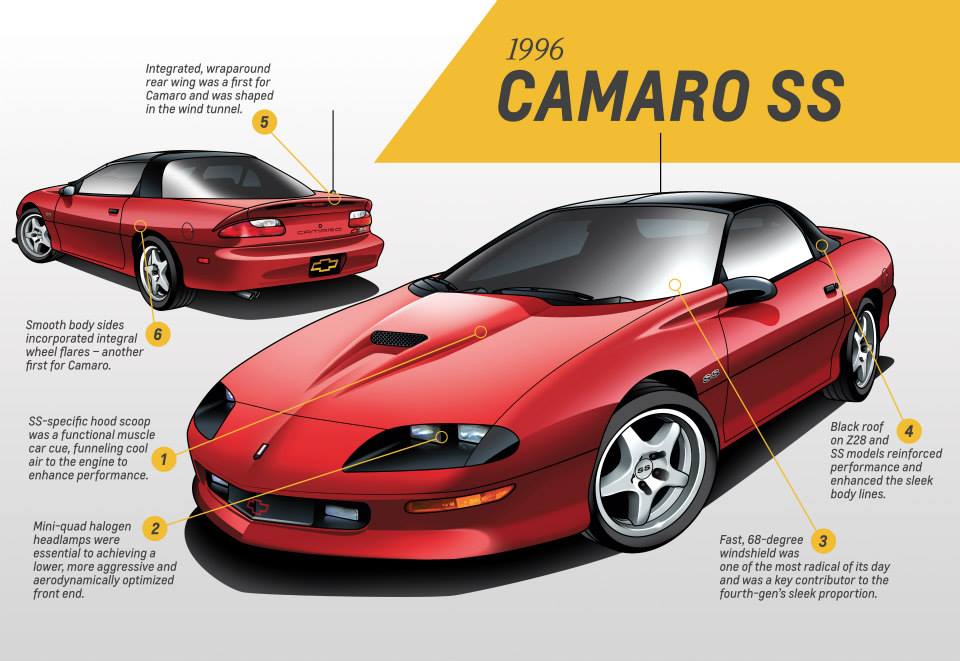 “More than 20 years after its debut, the fourth-generation Camaro still looks as sleek as anything on showroom floors today,” said Bennion. “It was a very aggressive design intended to evolve the proportion from the third-generation car with a provocative exterior and greater aerodynamic performance. It has a very sculptural form vocabulary that was definitely all-new for the Camaro.”

The dramatic proportions for the fourth-generation Camaro included a fast-rake windshield, which extended the front cowl/firewall line forward, combined with a change to a “bottom-breathing” engine-cooling arrangement, to support the strong wedge shape of the overall car.

“Having a low front end was important to the design,” says Bennion. “It really worked with the high deck lid rear spoiler to enhance the appearance of motion. All these years later, it still looks contemporary – and fast!”

The Camaro received an updated front-end appearance in 1998. Bennion selected the aggressive good looks of the higher-performance 1996 Camaro SS to highlight the best attributes of the generation: 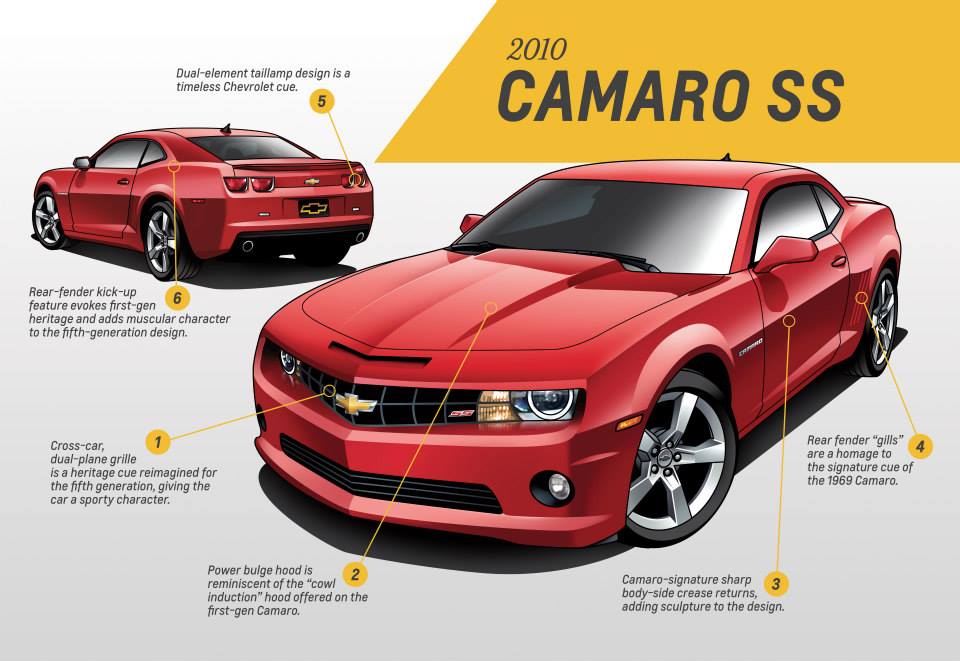 “They say absence makes the heart grow fonder and that couldn’t have been truer than as demonstrated with the enthusiasm that followed the introduction of the fifth-generation Camaro,” said Peters. “After an eight-year absence, the return of Camaro was a thunderbolt that reignited the passion of Camaro enthusiasts around the world. It’s a car design for those who like to drive, and its elegant design makes you smile every time.”

While the iconic 1969 Camaro was the unmistakable inspiration for the fifth-generation Camaro, its design had to be more than simply a 21st century update, according to Peters. “Distilling the timeless essence of the design and translating into a fresh, contemporary Camaro was a challenge. The final design perfectly straddled that razor-sharp line between heritage and retro – and with five straight years at the top of the segment, clearly the fifth-generation Camaro connected with a whole new group of enthusiasts.”

Peters focused on the 2010 Camaro SS to call out the highlights of the fifth-generation design:

Founded in 1911 in Detroit, Chevrolet is now one of the world’s largest car brands, doing business in more than 140 countries and selling about 4.8 million cars and trucks a year. Chevrolet provides customers with fuel-efficient vehicles that feature engaging performance, design that makes the heart beat, passive and active safety features and easy-to-use technology, all at a value. More information on Chevrolet models can be found at www.chevrolet.com.