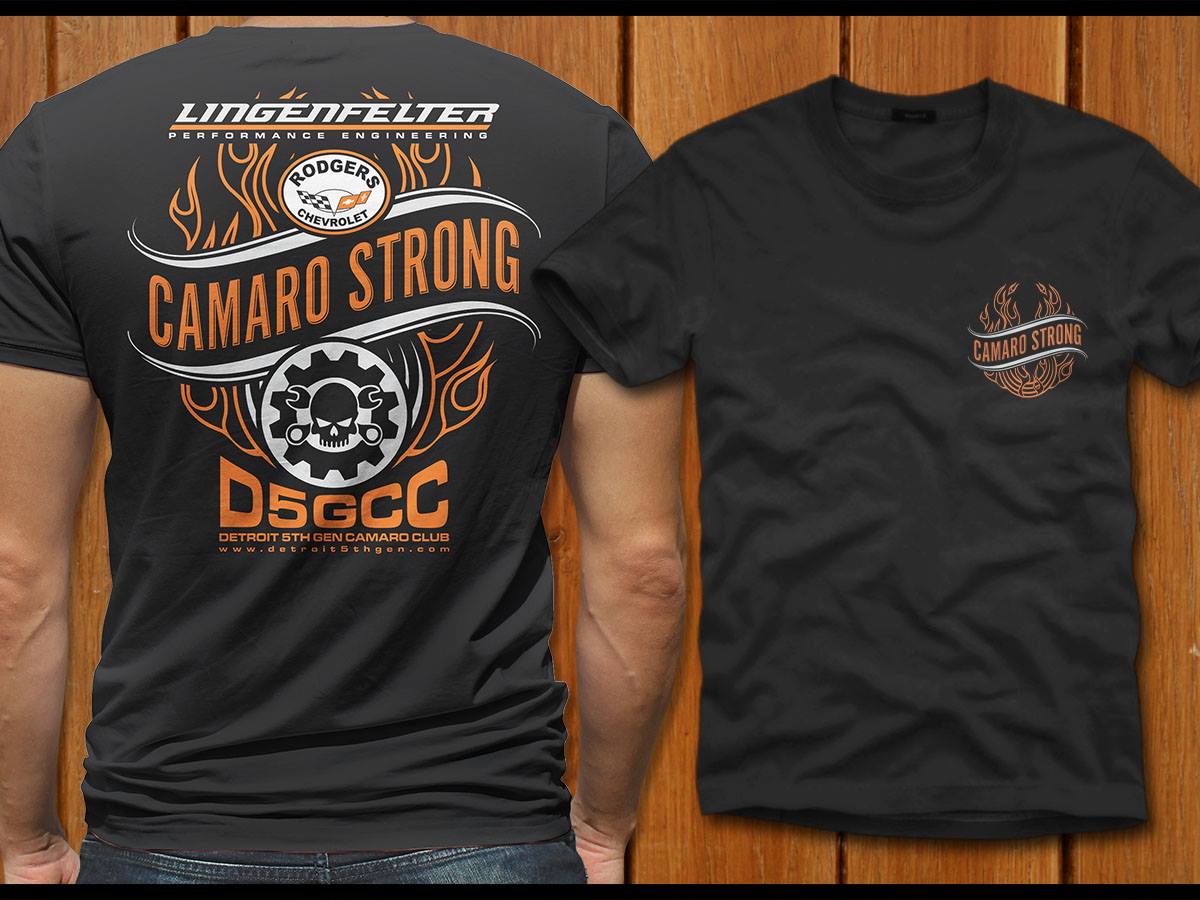 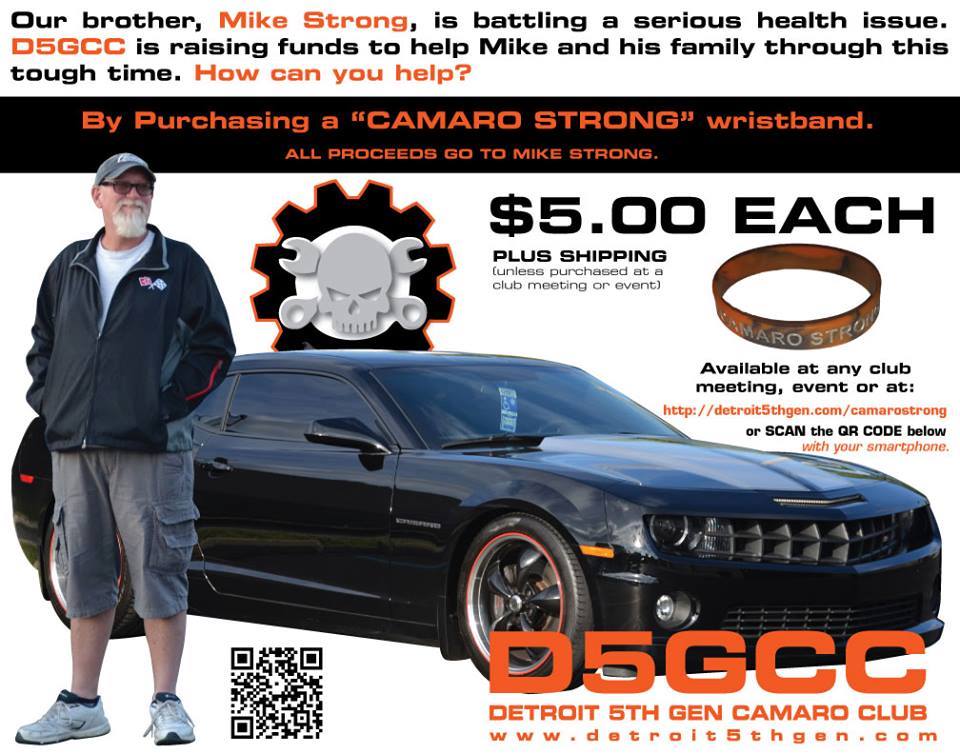 CamaroNews – Everyone knows that the current generation Camaro has not only made all enthusiasts friends all over the world, But brought us close together as good friends as this iconic car has. Detroit 5th Gen Camaro Club member Mike Strong is known all over the Detroit for his passion and great friendships. He has come down with a serious health issue, which being a great Camaro Community we always pay it forward and help a great car enthusiast like ourselves. CamaroNews caught wind of this charity and we have even made our own donation to Mike & Family. Camaro Enthusiasts Rebecca Doyle of Rodgers Chevrolet & Kristen Lingenfelter of Lingenfelter corporation jumped into help support and get things moving for Mike Strong. They have a multiple list of items for all budgets and even have a real nice Camaro T-shirt that has been a hit with a lot of the enthusiast’s. We want to say if you love Camaro like we do, Please make a donation today for our Camaro Comrade Mike Strong. It’s not just a car The Camaro has created friendships all over the world and that is simply who we are. Giving back and and making donations is what the Camaro community is all about. Below is a letter written by Mike’s wife Julie telling all about Mike.

Married in 1984 to Julie, Mike already had a love of cars. At the time, it was a 1963 Ford Galaxy 500 he and his grandfather put together.   Newly married, young, and starting from the ground up, the Galaxy sadly was relinquished for a more practical vehicle.  Soon enough there was a house and kids, and Mike loved being a family man as much as cars. Over the years came bikes, a snowmobile, Harleys, boats and several cars & tricks; “we went through it all”.  His son, Alex, shared Mike’s love of cars.  It took very little persuading Alex to enlist Mike’s help securing his own first vehicle.  Mike and Alex worked on that truck the same way Mike’s grandfather had worked with him.  The truck was ready to go before Alex even had his license.

As both a car lover, and professionally dependent on the auto industry, the crash of 2008 took a toll on Mike and his family the same as thousands of others.  When his local company was bought out Mike was fortunate to find work.  The new job was an hour drive away and gas prices were rising.  One son was already in college and one approaching.  Mike saw some relief in ordering a new product Chevy was developing, the sporty, economical Sonic.  Suffice it to say, the Sonic did not work out.  In less than 6 months of owing it, the Sonic spent more time in repair than with Mike.  In an emotional decision, Mike then bought his first Camaro.  In May of 2012, Mike was introduced to, and joined the Detroit 5th Gen Camaro Club.  He loved the camaraderie; shared passion for these reinvented classic cars, and the friendly competition for modifying and individualizing each car.  It was not long before Mike’s first stock gen 5 was traded in for his 2013 SS V8, ordered and built exactly to Mike’s specification.   Many mods later… Mike was having the time of his life with that dream car.

June 2013 brought troubling health symptoms, stomach pain, and fatigue.  In August 2013, Mike was diagnosed with Stave IV Colorectal cancer. It was nearly blocking his colon and had metastasized to his liver and distant abdominal lymph nodes.  Being otherwise young and strong, the doctors immediately put Mike into a regiment of intense chemotherapy.  The first six months of treatment were grueling and took as much a toll on Mike as the cancer itself.  The good news was the chemo was remarkable effective on both the colon and liver.  The lymph nodes were still resistant.  A side effect of the chemo was painful neuropathy, which also severely affected Mike’s mobility.  Jody young would stand next to Mike ready to catch him because he wobbled so much.  Mike retired in May 2014 to devote more time to family, and more energy to battling his cancer. A bright spot was that doctors had not really expected Mike to make it this far, but he did and was still optimistically fighting!

By October of 2014, Mike was dealt yet another blow with the diagnosis of a brain tumor; unrelated to the colon cancer and faced some hard decisions.  His mobility, neuropathy and other complications from the cancer and chemo were severely affecting his daily life.  He sadly let go of the 2013 SS, with all the mods, headers, Hurst shifter and even the nightrider lights.  By December 2014, Mike doctors told Mike that despite all the chemo, the lymph nodes continued to grow.  There was only one drug left to try, a very newly released chemo medication.  After all Mike had fought back against, this drug proved debilitating and sent him to the hospital.  Mike was exhausted, and not a little bit scared.  The chemo was stopped and Mike rested.  A bright spot was the brain tumor was stable.  Remarkably once again, Mike rallied and began to feel stronger.

Mike was feeling strong enough even, that Julie pushed for his case to be reviewed one more time by the Tumor Board.  Finally, after 18 months, the doctors feel the time is right for surgical intervention.  It will be a comprehensive surgery addressing the colon, liver and abdominal lymph nodes.  Surgery will not be a cure, but can reset the clock for Mike, giving him more quality time.

Throughout this odyssey, Mike and Julie have been “amazed, grateful and humbled” by the support, they have received from the Detroit 5th Gen Club.  Through the fundraisers and generosity of the club, Julie will be able to take the needed time off work, to be with Mike while he is hospitalized and recovers.  Mike said, “Through all of this, the Camaro club has been at my side.  I love them all!”

Donation links and clothing. All Proceeds Go to Mike and Family. 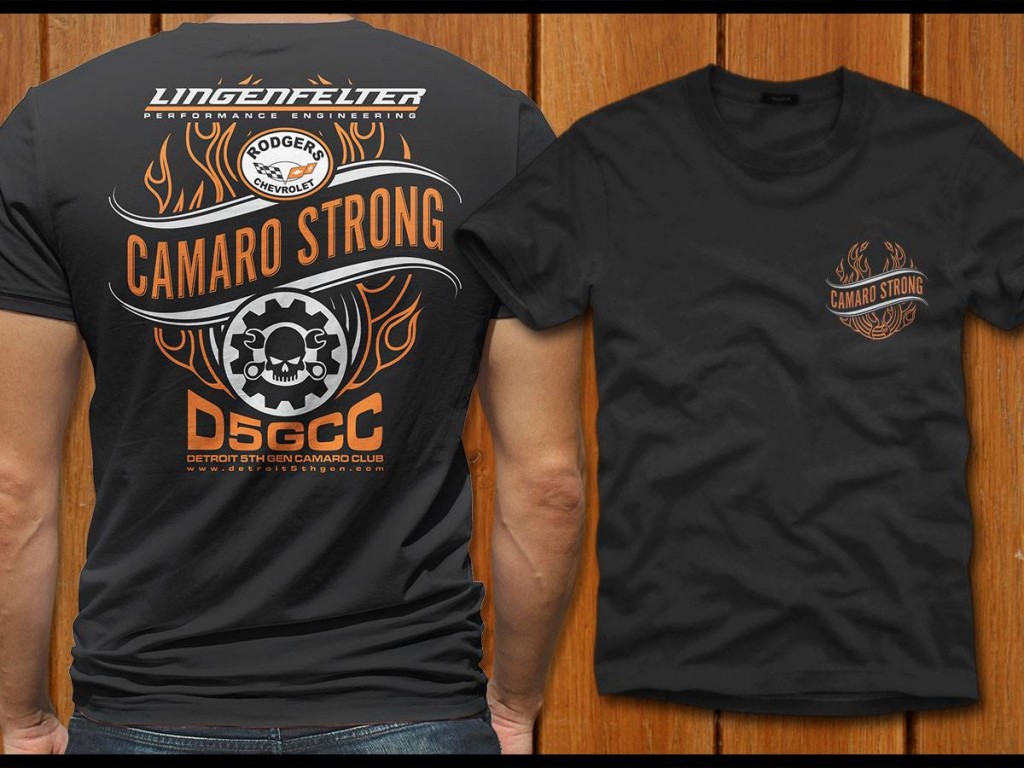