When I found out GM was bringing back the Camaro and after seeing it in Transformers, I knew I’d eventually have one. Well I’m on my second. I wanted to get one right away, but circumstances what they were, I had to wait. In March 2010, I brought in my Avalanche for service, while waiting I walked the lot at TLC (Terry Labonte Chevy). Had to be an SS, I really wanted a 2 SS, but couldn’t swing it. They happen to have a LS3 – 1SS and was able to make the deal on that. Black with Silver Ice rally stripes. I was going to slowly add interior mods (auto dim mirror, homelink, steering wheel audio controls, and Bluetooth) to make it more 2SS-ish. Do some small performance and handling mods and call it done. I actually made it 1 yr. before my first mod (GM Heritage Grill). Wasn’t enough, I found myself wanting to do more and more (guess I caught the mod bug). Over the course of the next 3 months I bought Borla Touring axleback kit, RotoFab, Forgestar wheels and tires, Kooks headers, and I installed them as I received ‘em. With the internet you can find just about any write-up.

Well I got a hankering for a 2011 2SS/RS LS3. I started searching in June 2011, and it took most of the month to find one that I was destined to get; she was all Black. So, off came the RotoFab, and headers. I didn’t want to mess with the grill, so part of my trade deal was for the dealership to swap it over to the new car. Also, they got to keep the Borla exhaust and I got Cyber Grey rally stripes.

I picked up Midnight Angel June 25, 2011 from Bill Black Chevy in downtown Greensboro. The RotoFab and wheels went as soon as I got her home from the rally stripe and Heritage Grill install. I did research on catbacks, and decided on the Mach-X from Solo Performance. It came just before the July 4th weekend, so that’s when that went in. That was easier since I had the practice from the 2010. I tried to make it work but even with two O2 extenders on each rear sensor the CEL would trip after about 200 miles. So I got a SCT handheld tuner and JRE tune. Midnight ran so much better with the tune for my bolt-ons, and my gas mileage kept getting going up. After all that, I’ve kept any modifications or additions on the small side. I installed grey vinyl gill slits, vintage Camaro V-emblem on both fenders. I picked up a spare mail slot cover and painted it grey. I was born in Europe (Poland), so I designed and had a friend of mine make me a Euro front plate bracket. (I didn’t like any of the ones on the market so that’s why I had one made). I bought a spare engine cover and my intention was to paint cut the top off install some black aluminum mesh, paint the silver area cyber grey and gloss the black areas, install stainless hardware in the fake bolt hole areas. Well I went to our monthly cars n coffee meets and one of my 5th Gen Camaros of the Carolinas, club members had done just that, but in Red to match his car and was offering to do the same to whomever wanted it done, just had to pay for the extra parts and paint etc. Pretty nice deal for me and it came out super!! Last week I picked up a polished SS Radiator cap, and a brushed LS3 Oil Cap.

Today, I installed probably my most superb modification. While, it may not sound like much, but it’s a new hoodliner, but not just any hoodliner. Custom airbrush artwork by Pepper Martin. 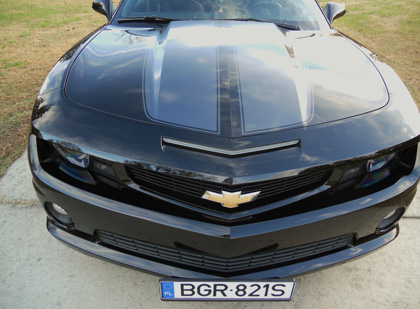 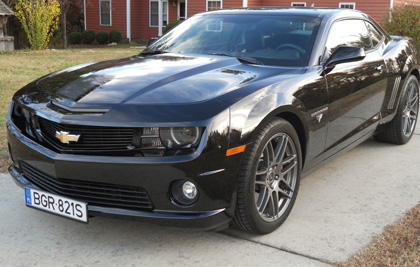 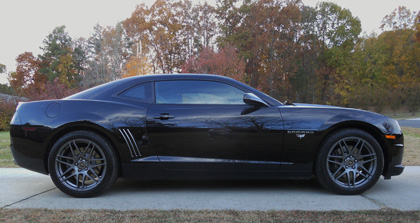 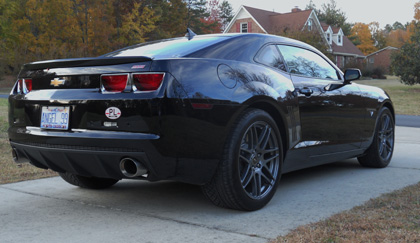 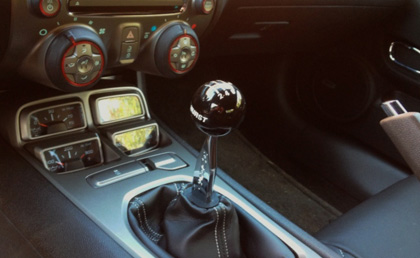 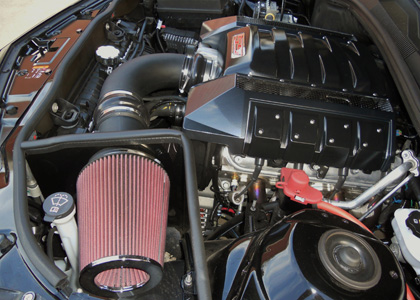 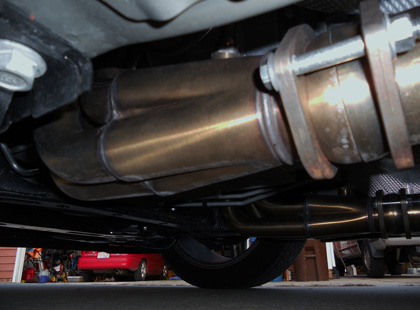 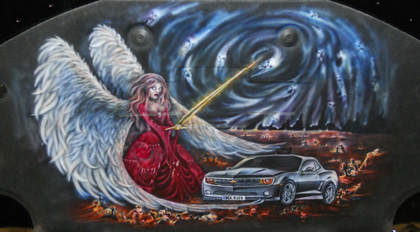