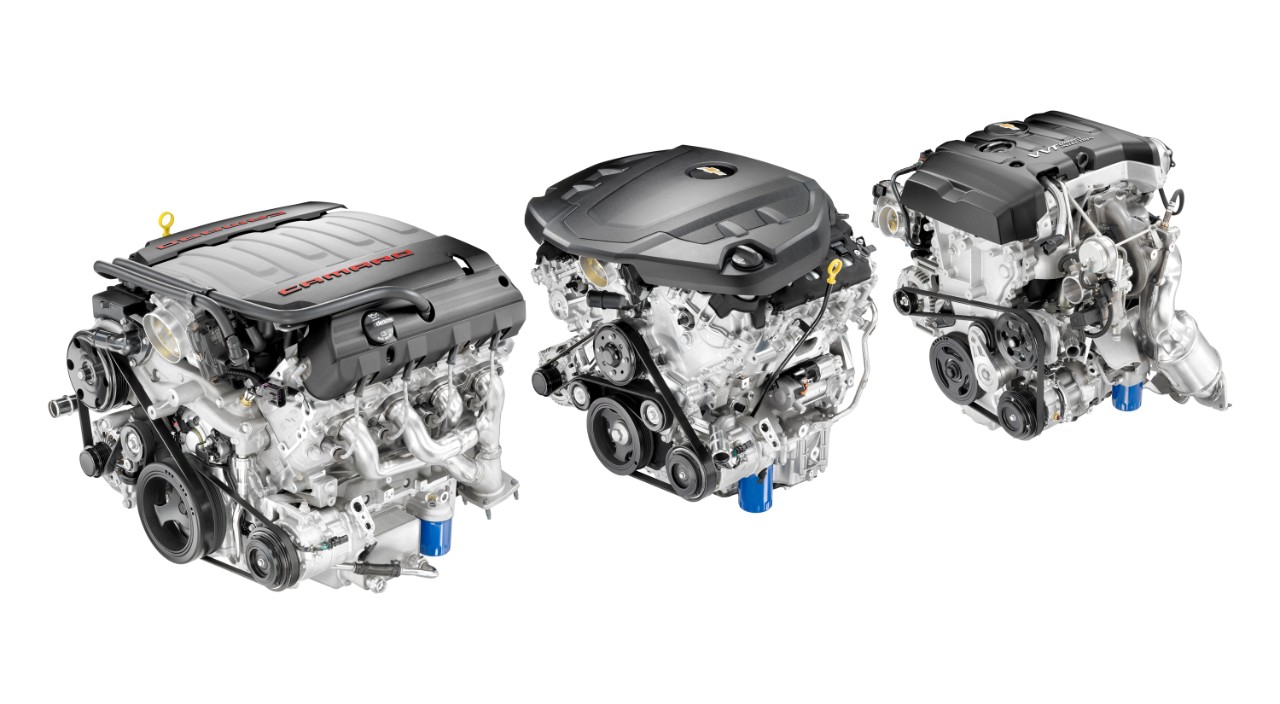 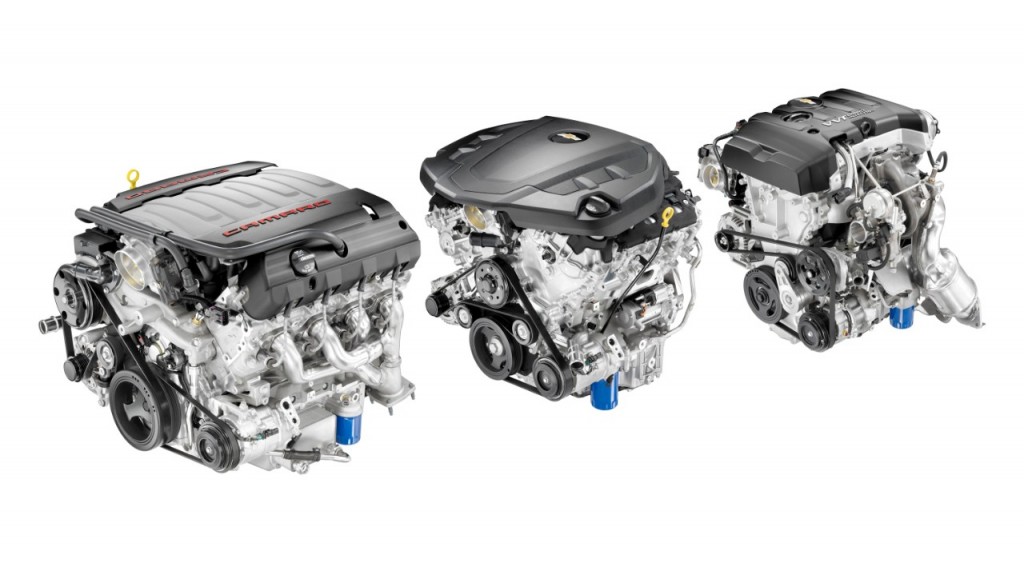 The lineup includes an Ecotec 2.0L turbo, a next-generation 3.6L V-6 and the LT1 6.2L V-8. The 3.6L offers an SAE-certified 335 horsepower (250 kW), giving it the segment’s highest specific output of any naturally aspirated V-6, while the LT1 is certified at 455 horsepower (339 kW) and 455 lb-ft of torque (617 Nm) – for the most powerful Camaro SS ever. The new engines are matched with six-speed manual transmissions and all-new eight-speed automatic transmissions.

The Ecotec 2.0L turbo will deliver 0-60 mph acceleration in less than 6 seconds and offer more than 30 mpg on the highway (GM-estimated), making it the most fuel-efficient Camaro ever.

“Everything about the 2016 Camaro is focused on a fun, engaging driving experience and that’s delivered with each of its new powertrains,” said Dan Nicholson, vice president, General Motors Global Powertrain. “From the first-ever turbocharged engine in a Camaro and an efficient V-6 with more power than many of the V-8s offered in previous generations, to the return of the LT1 small-block V-8, there is a choice to satisfy every taste and performance desire.”

All three engines feature direct injection, which enables an increased compression ratio for a greater balance of performance and efficiency. For models equipped with an automatic transmission, the all-new 3.6L V-6 and the new LT1 also employ Active Fuel Management cylinder deactivation technology, which disables some cylinders under light throttle applications to enhance efficiency. In the 3.6L, two cylinders are deactivated and in the LT1 V-8, four cylinders are deactivated.

The Ecotec 2.0L turbo and 3.6L are offered with the all-new Hydra-Matic 8L45 paddle-shift eight-speed automatic transmission. It is based on the Hydra-Matic 8L90 eight-speed, which is offered on the Camaro SS, but scaled for the performance envelope of the smaller engines and offers an estimated 5-percent efficiency improvement over a comparable six-speed automatic.

They are also offered with six-speed manual transmissions, as is the Camaro SS. Its TREMEC TR6060 six-speed manual features Active Rev Match technology, a driver-selectable feature that automatically “blips” the throttle for perfectly timed downshifts.

The turbocharger generates up to 20 pounds of boost and its twin-scroll design helps make the most of the usable power from the engine, practically eliminating turbo lag and helping deliver a broad power band. It also gives the engine the rapid throttle responsiveness associated with a higher-displacement, naturally aspirated, high-performance engine. Electronically controlled supporting components, including the wastegate and bypass, help optimize performance and efficiency.

Additionally, an A356T6 aluminum cylinder head is produced using a Rotacast process for high strength, reduced machining and improved port flow. The head also uses stainless steel intake valves that are nitrided – nitrogen is diffused into the surface of a metal to create a case-hardened surface – for improved durability and undercut to improve flow and reduce weight. The exhaust valves have sodium-filled stems that promote valve cooling to reduce wear on the valve guide for better alignment and a consistent seal between the valve seat and valve face.

Structurally, the all-new 3.6L V-6 builds on the proven, award-winning design of the Camaro’s previous V-6 engine, including an aluminum, deep-skirt cylinder block. The optimal 60-degree cylinder angle is retained, with the bore size enlarged from 94mm to 95mm and the bore centers stretched from 103mm to 106mm. The cylinder block features six-bolt main bearing caps and inter-bay breather vents that enhance power and oil flow management.

About 20 percent of the components are specific for the Camaro’s architecture, including new, tubular “tri-Y”-type exhaust manifolds. It also offers advanced technologies, such as continuously variable valve timing, direct injection and Active Fuel Management (on automatic-equipped models) to help balance efficiency and performance.

Those technologies support an advanced combustion system that incorporates a unique cylinder-head design and a new, sculpted piston design that is an integral contributor to the high-compression, mixture motion parameters enabled by direct injection.

Compared to the fifth-gen Camaro SS’s previous LS3 engine, the new LT1 cylinder head design features smaller combustion chambers designed to complement the volume of the unique topography of the pistons’ heads. The smaller chamber size and sculpted pistons produce an 11.5:1 compression ratio, while the head features large, straight and rectangular intake ports with a slight twist to enhance mixture motion. This is complemented by a reversal of the intake and exhaust valve positions, as compared to the previous engine design. Also, the spark plug angle and depth have been revised to protrude farther into the chamber, placing the electrode closer to the center of combustion to support optimal combustion.

The pistons feature unique sculpted topography that was optimized via extensive analysis to precisely direct the fuel spray for a more complete combustion. The contours of the piston heads are machined to ensure dimensional accuracy – essential for precise control of mixture motion and the compression ratio.

The new 8L45 has a smaller overall diameter and length, and weighs approximately 33 pounds (15 kg) less, than the 8L90 eight-speed – a transmission already lighter than GM’s 6L80 six-speed automatic.

A numerically higher first gear ratio – 4.62 in the 8L45 and 4.56 in the 8L90 – also helps drivers start off more confidently, with a greater feeling of immediate performance. Smaller steps between gears, compared to a six-speed transmission, keep the engine within its optimal rpm range, making the most of its horsepower and torque to optimize performance and efficiency.

World-class shift time quickness and responsiveness are accomplished with a Gen II controls system, which works with variable force solenoid technology and three internal speed sensors. The transmission controller is mounted externally and its processor executes hundreds of calculations and commands every 6.25 milliseconds.

Additionally, friction-reducing design features – including synthetic fluid – and lower spin losses via a powerflow that uses only two open clutches contribute further to efficiency. The torque converter design is also specific to each transmission.