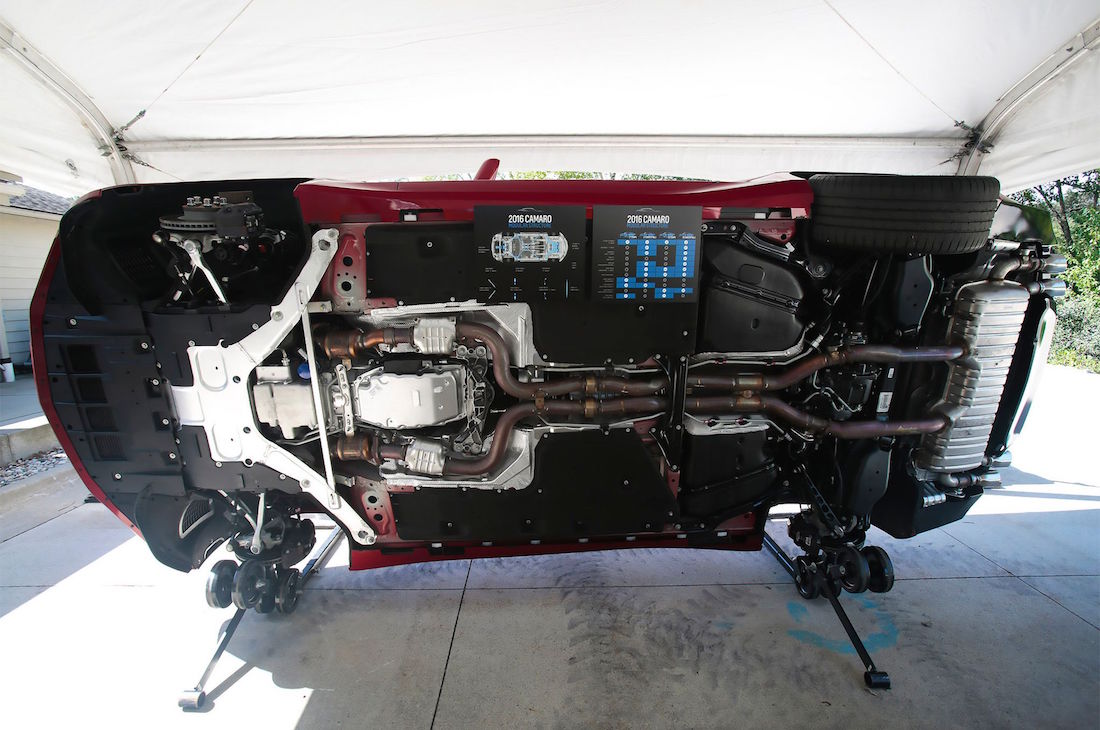 Chevrolet invited us to drive the 2016 Camaro on some scenic roads outside of Detroit and see what the all-new sixth-generation car was all about. We can’t tell you what it’s like behind the wheel just yet, but we can share some interesting tidbits about the car from speaking with Aaron Link, Camaro Lead Development Engineer, as we inspected a 2016 Camaro SS that had been tilted on its side to show off its new suspension and chassis.

Much of the floor stampings are similar to the Cadillac ATS coupe, which shares the Camaro’s Alpha platform, but there were a lot of changes made during the Camaro’s development. For example, the suspension cradles could swap between the two, although the suspension links are longer on the Camaro because of its increased track width. The upper camber link and the toe link were repositioned accordingly. The Camaro uses more caster, partly due to the longer wheelbase that allowed engineers to kick the strut forward at the bottom. Caster curves are also improved over the fifth-generation Camaro

One part that’s directly shared is the shear plate that’s the same piece found on the Cadillac ATS-V. It’s the yoke-shaped part that ties the rocker panels together. It’s made from aluminum stampings and extrusions welded to form a single piece with a thick cross section. 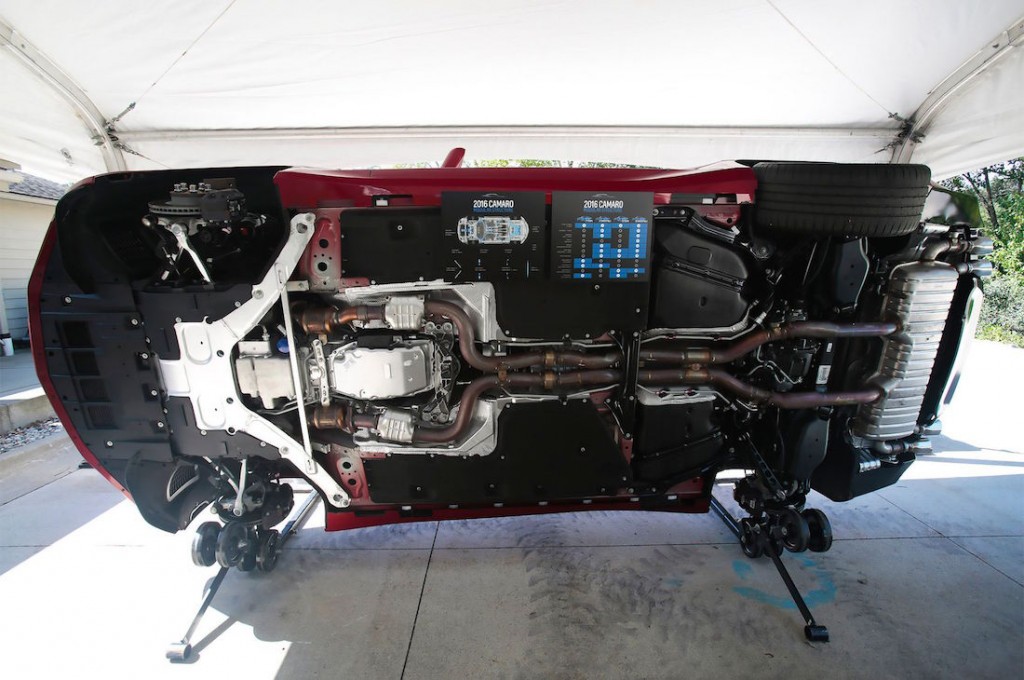 The huge transverse muffler is divided in two internally for each bank of the engine. The four exhaust tips are only found on the optional NPP exhaust. It uses a butterfly valve that can either let the exhaust flow through unobstructed, or detour through the muffler. Tour mode lets the LT1 come to live at full volume at startup, then closes for quiet cruising. In Sport and Track mode it’s open all the time while Snow/Ice Mode leaves it closed all the time. 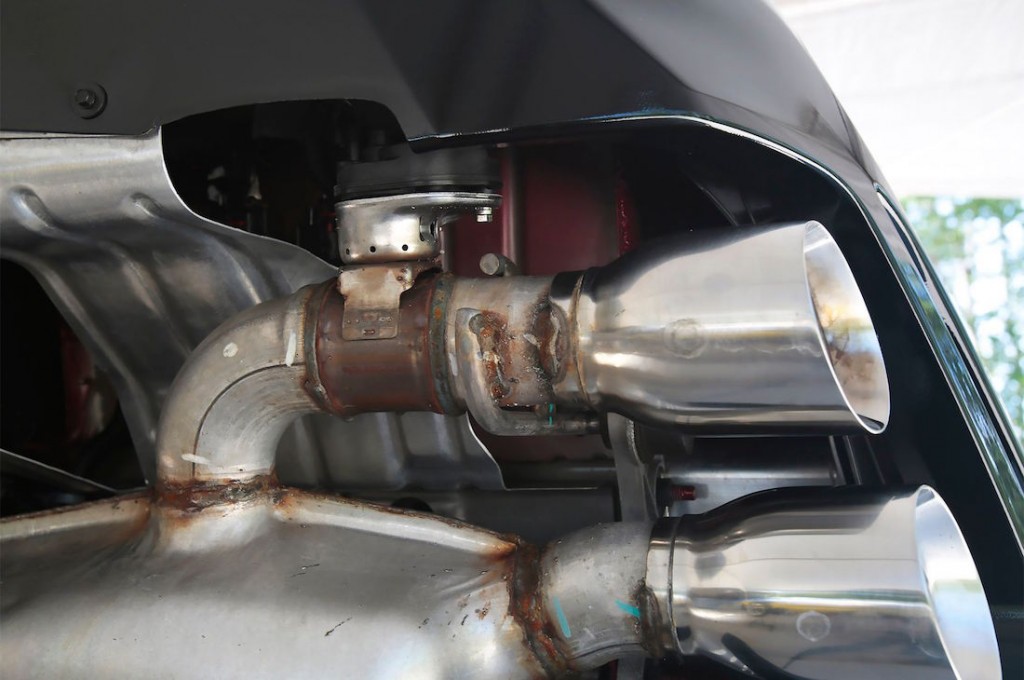 Although the 2015 Camaro also had a 3.6L V6, the 335hp 3.6L powerplant is a new design for the sixth-gen. It uses a larger bore and a shorter stroke than the last 3.6L and it’s the first application of Active Fuel Management in a V6 Camaro, meaning the 3.6L will run as a V4 during light throttle operation, just like the LT1 V8.

Because the exhaust gas volume is reduced when only running four cylinders, Camaro uses a valve in the exhaust to increase back pressure. This is what the valve on an LT1-equipped SS. 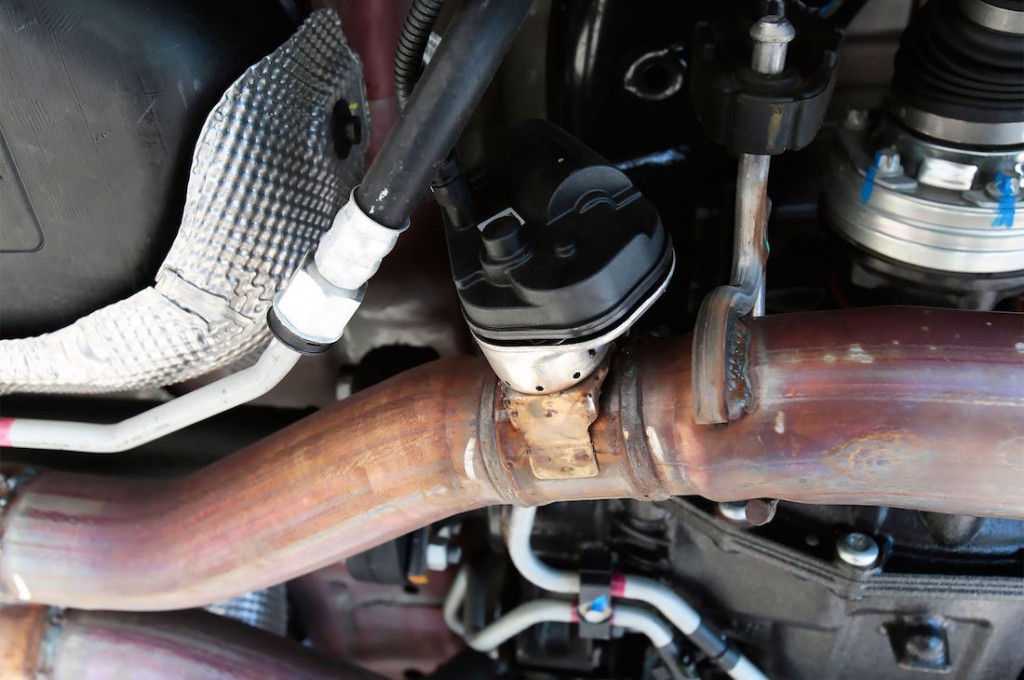 The smaller of the two new differentials on the sixth-generation Camaro is used on all four-cylinder models and the 6-cylinder automatic transmission models. It is shared with the new, full-size Cadillac CT6 and uses a 200mm ring gear. The housing is cast iron and the side plate is cast aluminum.

V6 manual cars and all V8 models get larger half shafts , a 225mm ring gear, and a cast iron side plate. “For noise and vibration it really is superior. If just cleans up the traditional diff noise we don’t want.” 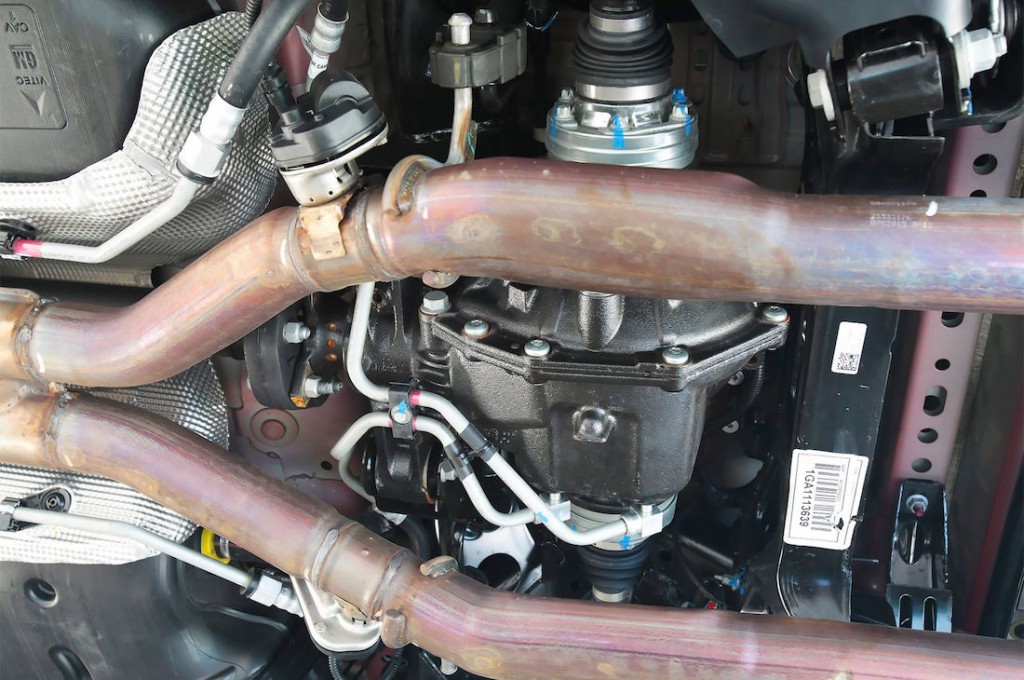 All manual trans cars and all SS Camaros use a clutch-style limited slip. The four and six-cylinder autos use an open differential.

The 3.6L and 6.2L pipe induction noise from the intake plumbing upstream of the throttle body through a diaphragm and right up to the firewall. Here’s the LT1 engine bay and if you look below the intake duct you can see the “kazoo” that routes induction sound toward the cockpit. 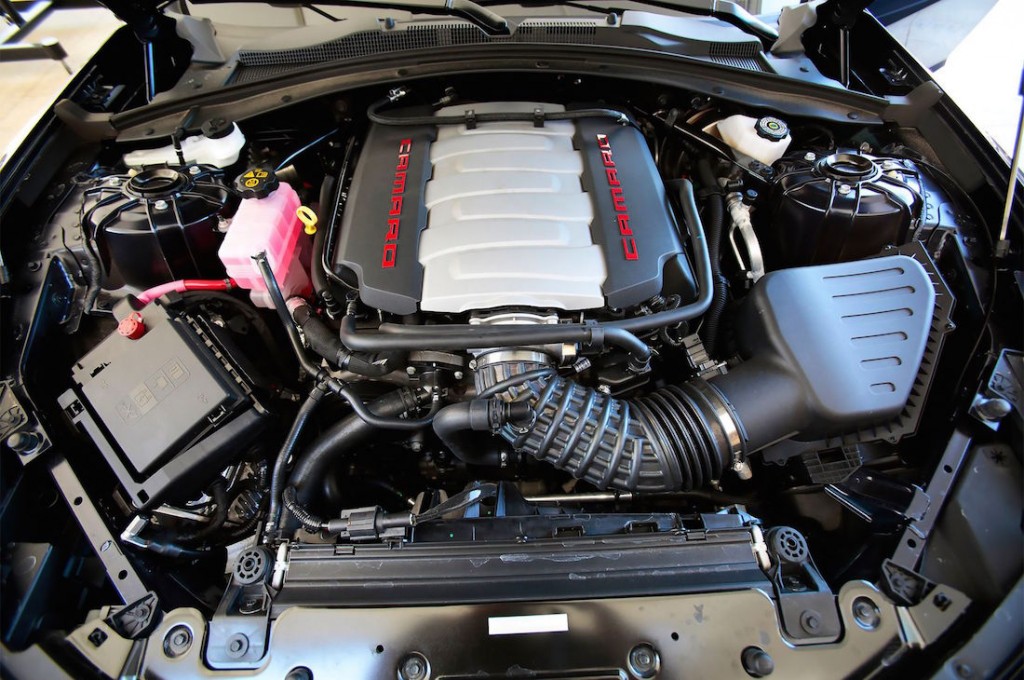 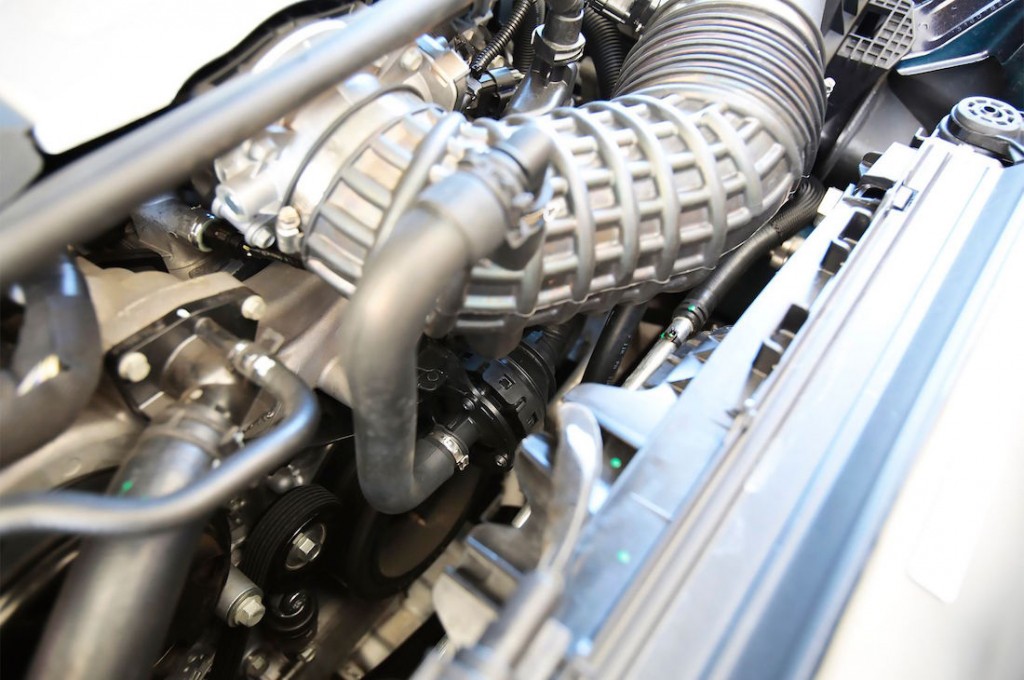 The four-cylinder uses and active system to enhance engine sounds through the stereo. Camaro lead engineer Aaron Link told us it can be turned off. “We’re not trying to make it sound like a V12, it just fills in holes that a turbo can muffle sometimes. You can hear the turbocharger in the 2.0L engine. “Especially windows down, you can hear it chirp.” 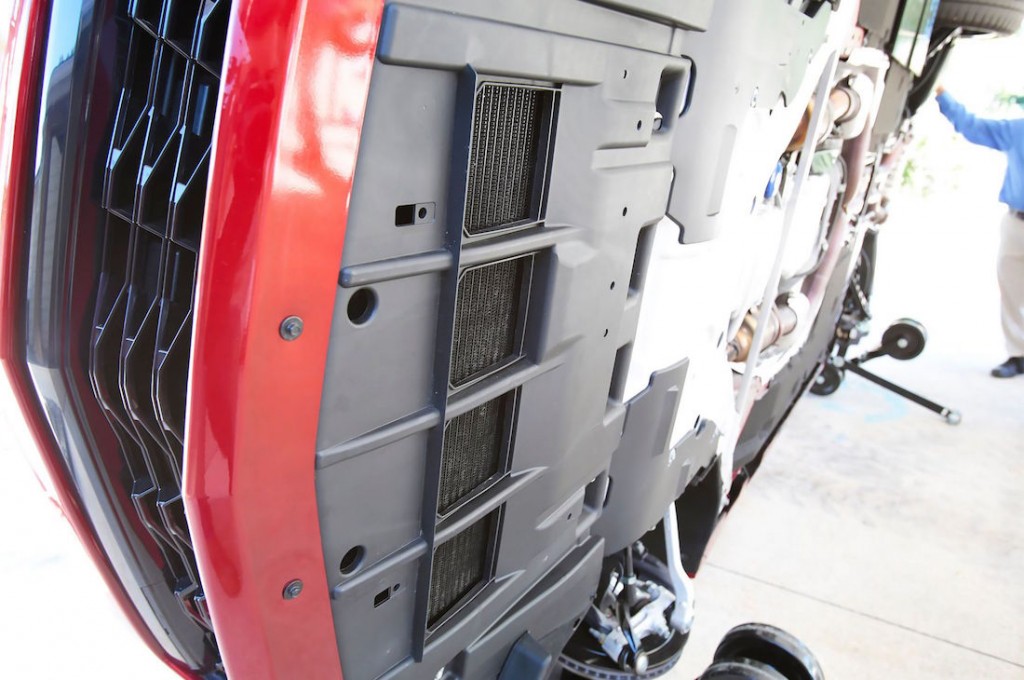 Because the Alpha platform is narrower, Camaro engineers split the engine cooling between three radiators. One is mounted in the traditional location and uses an 850-watt electric fan. Two outboard radiators are canted inboard and fed high-pressure air from the outer edges of the center lower grille opening.

The Camaro engineers call the contour of the Camaro’s roof a “reverse Mohawk”. If you opt for sunroof the panel is smooth instead. 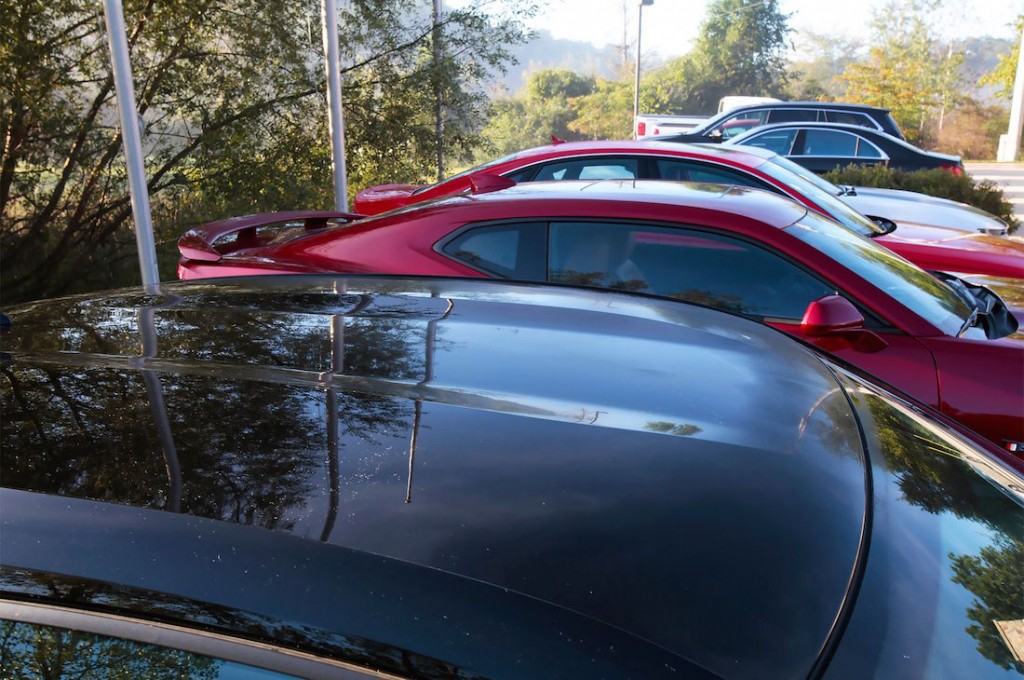