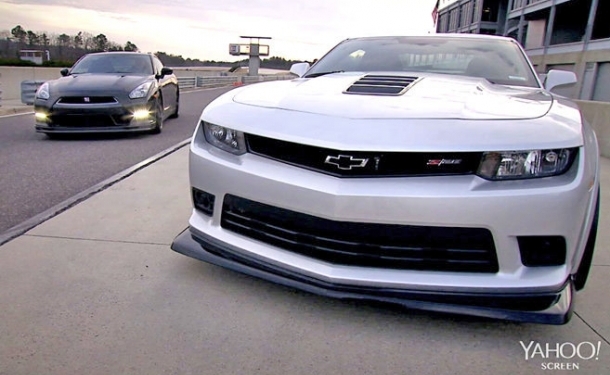 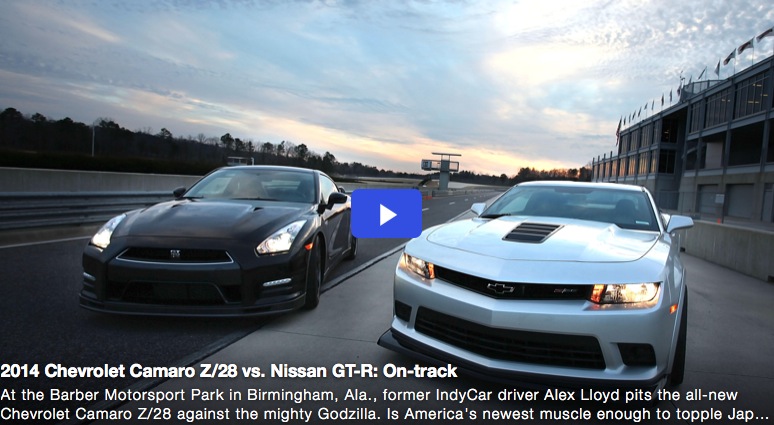 Imagine, if you will, an email containing a first drive invitation for Chevrolet’s all-new Camaro Z/28. As you continue to thumb through, you notice a challenge of sorts – feel free to bring any competitor of your choice for a comparison.Time to pick up the phone. Within 30 minutes a 2014 Nissan GT-R Track Edition is secured. Our Z/28 first drive was to be a showdown between American muscle and Japanese finesse. The venue for our battle: the Barber Motorsport Park in Birmingham, Ala. — a track with curves as unpredictable as Sandy Koufax, and more crests than Ben Nevis.I’d ridden in the passenger seat of a Z/28 test mule last year, and the grip level was astounding. The power from the 505-hp, 7.0-liter LS7 V-8 motor was punchy, and yet civilized. The issue back then was the carbon-ceramic brakes: “It doesn’t stop how I’d like it,” the Chevrolet engineer, who was in the driver’s seat, told me.Fast-forward a month and it was determined that the Pirelli Trofeo R tires were slipping on the rim. Just 10-degrees, they thought — until they realized that 10 was more like 370. After blasting some abrasive grit to the surface of the rim, the problem was solved.

And so here I was. The finished product sat in an open garage at Barber, flurries of mechanics warming her up. I was summoned to the mandatory — keep the shiny side up, don’t bruise our baby — safety briefing.

Parked ominously off to the side was the black GT-R. No mechanics. Just Steve, Nissan’s motorsport manager, his luggage, and a set of car keys. Ironically, Steve was the name given to the Z/28 back when the idea to revive the iconic moniker was envisaged. Only key individuals within the GM Empire knew Steve was not the engineers’ coffee boy, but actually the most capable Camaro ever.

It’s also the most expensive. But, at $75,000, listen to what arrives as standard: Carbon-ceramic Brembo brakes, dampers by Multimatic — the same company that supplies the Red Bull F1 team and the first production application outside of the exclusive Aston Martin One77 — and the aforementioned tires.

Those tires. Originally built for an amateur Porsche racing series in Europe, they’re practically slicks. With less tread than Mini Me, in the dry, they’re stunning. However, when it rains, as it did in the closing moments of the car’s timed Nurburgring run — where it still lapped faster than a Lexus LFA — spare underwear becomes a necessary option. Quick hands, too.

Back to the price. Here’s what you don’t get: Air conditioning (that’s an option – one you should definitely take, despite the roughly 30 lbs. weight penalty), a stereo, a navigation, or sound deadening.
The Z/28, then, is a race car. Only one with a usable trunk, backseats (left because they’re part of the car’s structure, and the weight saved by removing them and adding the necessary rigidity would make any gains negligible), and a license plate.

Why a $116,000 GT-R? Surely a Ford Mustang Boss 302 Laguna Seca is more comparable? Chevrolet has tested the two at its Milford Proving Grounds and claims (and has evidence to back it up) that the Z/28 is more than five seconds faster. Having driven both, I don’t doubt that. And the Shelby GT500? Well, that’s slower than the Boss.

Chevrolet says the Z/28 should hustle with the vastly more expensive GT-R and Porsche 911 GT3. Fighting talk, I thought. Over confident? Maybe.

As with every Camaro, the view from the driver’s seat is shocking. I’d have seen better if I plunged my head into a pool of hydrochloric acid and went mining. But the Z/28 is a track car. So you overlook that. You don’t care that the interior is sparse, or that the rear seats are sized for Bilbo Baggins. You don’t care how it looks. All that matters is how it drives. The GT-R, conversely, arrives with cool air: it has a lovely stereo, navigation, and the power of sight. It has turbos — two of them — and pushes 545 hp. At 463 lb.-ft. of torque, it’s 18 less than the Z/28’s 481 lb.-ft. But it has shorter gear ratios linked to a dual clutch automatic transmission, as opposed to a six-speed manual in the Camaro, and, notably, features all-wheel drive.
It should be faster. It should be more refined. The Z/28, despite weighing 300 lbs. less than the Camaro ZL1, is a portly 3,820 lbs. Camaros are notoriously heavy. And even in this, its lightest form, mass poses a problem.

The GT-R, however, is no Takashi Miura. At 3,881 lbs., it’s even heavier than the Camaro. Both cars, therefore, need a diet, especially with the GT-R’s all-wheel drive system adding a chunk of extra metal. Oddly, the Z/28 has had one. Even the rear windshield has been thinned by 0.3mm. That saves 400 grams, documenting the seriousness behind Chevy’s efforts. So despite the hard work, why is it still so inherently heavy?

I had hoped to get a lap time in both cars to discover which is faster. Only there was a problem. The folks in Nashville who prepared the GT-R forgot to tighten the lug nuts. After a few runs concentrating on the video I was recording, I pitted noticing a worrying vibration. The stud, with the nut still attached, had sheared clean off.

After tightening the remaining ones, there was a concern regarding pushing it to the limit, given it now possessed too few nuts. I might have thought otherwise, but this wasn’t my car. And Steve needed it to drive home.
So I spent a lot of time thrashing the Z/28. It was 30 degrees in Alabama, and on cold tires, it was treacherous. As the rubber warmed, grip like you’ve never felt materialized — even more than I remembered from my time as a passenger. The massive winglets on the front splitter and rear wing produces 440 lbs. more downforce than a Camaro SS. It hugs turns unlike many high-end supercars, in part due to the massive Pirelli tires. How much is down to the near-race tires is debatable, but don’t negate the importance of the dampers and new limited-slip Torsen differential.

There is still a touch of understeer, however (something that has plagued previous generation Camaros). This, though, is minute, although its setup feels safe. You can’t adjust the dampers yourself to add some neutrality — which is unfortunate for a track car — but Chevy doesn’t want you messing with them. And for good reason, as there’s no noticeable roll or pitch. It’s impeccably stiff, and yet it rides curbs without harshness or launching the car off line. When the back slides, it isn’t progressive. It snaps. Which is precisely what a race car does.

The GT-R, even with the Track Edition’s tightened suspension, floats and wallows compared to the Z/28. It also doesn’t feature carbon brakes. The Camaro stops like no production car I’ve ever driven. They’re that good. But the GT-R sprints out of the corner far faster. It’s inherent with Godzilla — thanks to short gear ratios and all-wheel drive. You never get used to it. You smile. You laugh. You don’t smile in the Camaro. You fret about missing your apex by 5 inches, or botching a shift (the manual gearbox is a tad notchy, and if you try to change too fast, what should be third, ends up as first). The steering, too, is lifeless — something GM is struggling with in all its performance cars.

But those brakes. And the car’s composure; its grip; its noise; its prowess.
Back in 1967, when the original Z/28 debuted, it was a fierce competitor on the SCCA race circuit – so this latest version has much to live up to. The new Z/28 does things no Camaro can. But I had more fun in the GT-R. It’s still mesmerizingly good through the turns, despite the occasional understeer. And you can sense the electronics help make driving on the limit effortless. But it’s just so damn fast out of the turns. I mean, hit the gas and clench. It’s spectacular.

Am I disappointing we didn’t get to see lap times? Absolutely. But in the same breath, that’s not a definitive marker over which car is best. In fact, in the real world, it’s nothing but bragging rights. What was more interesting to me was how differently both cars behaved.

To me, the GT-R felt quicker on the clock (just), primarily due to its acceleration advantage. But the Z/28, which costs $40,000 less, was more competent through the bends. Tires on the Camaro went off quicker, however — becoming a slithering mess during long runs. So get out your checkbook, because Trofeo Rs will be pricey.

I’m also not sure GT-R buyers would cross shop a Z/28. Despite its brilliance, a Camaro is still thought of by the elitist as crass. Those elitists would not drive a GT-R either; rather they’d snatch a GT3. The Z/28 and GT-R, though, are very different. One’s more for pleasure while the other is a no-compromise weapon.

But it’s the opposite of how I’d envisaged.

You imagine American muscle to be like a heavy mallet — punishing, somewhat sloppy, and brutish. You’d deem Japan’s acclaimed supercar to be refined, like driving in the Gran Turismo video game. And the Nissan is. It’s brilliant. Only the Camaro plays tricks with your senses. During my time at Barber it was like a piercing Samurai sword held by the hands of Musashi. While the GT-R, well, that felt like Thor’s hammer. 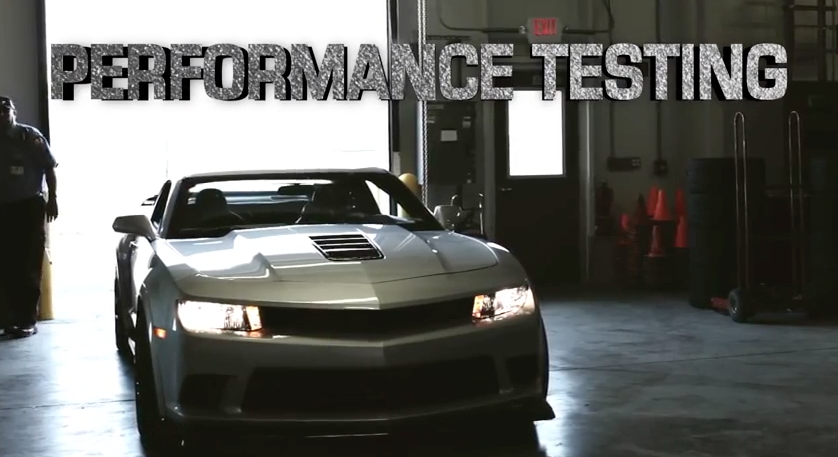 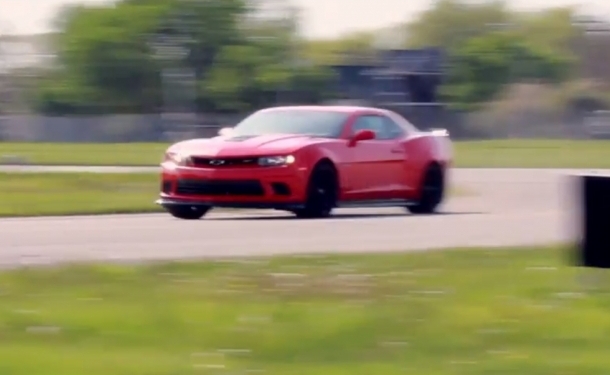 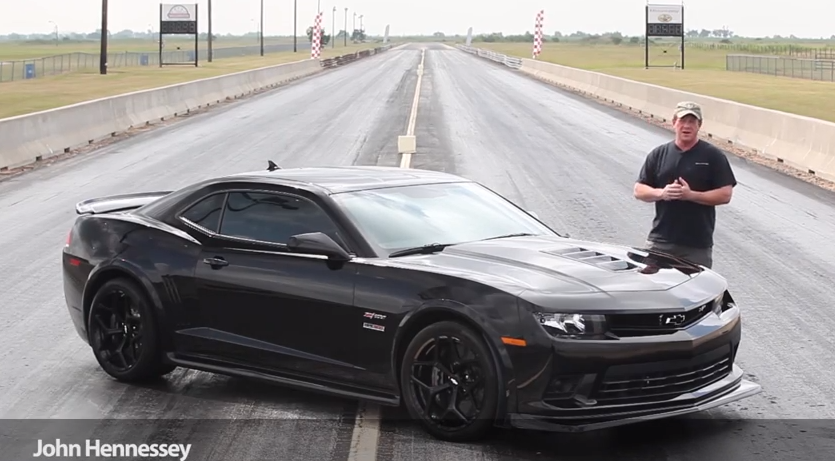 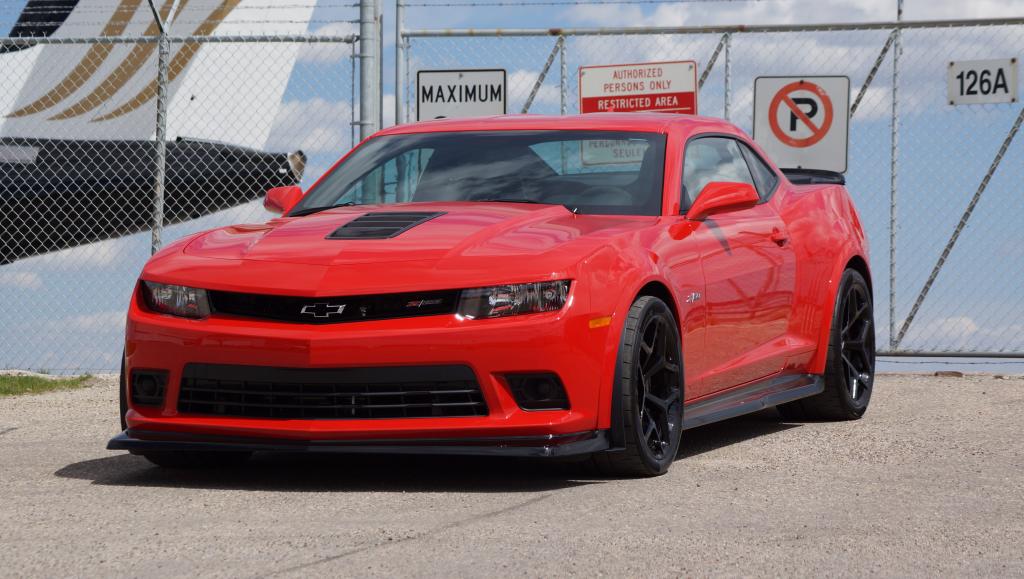 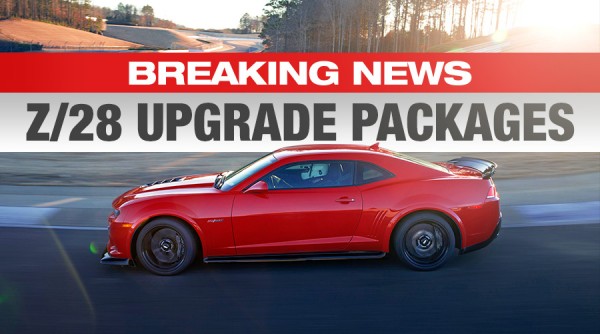