CamaroG6.com Spots Carscoops.com Digitally Renders How The Next Camaro Could Potentially Look 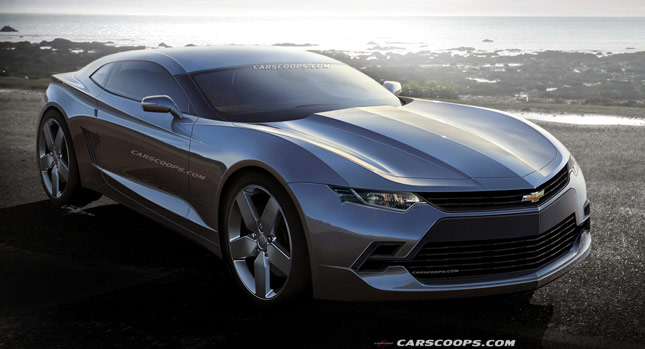 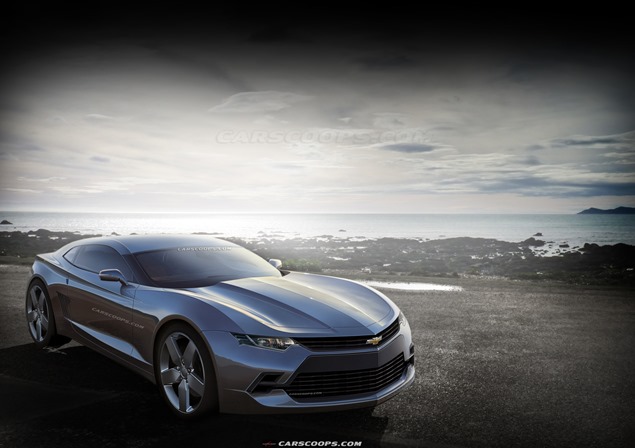 Good morning CamaroNews fans, Looks like CamaroG6.com was the first to spot this article from Carscoops.com about the upcoming 6th Gen. They put up a cool rendering on what they think will be the 6th Gen for 2016. Take a read to see for yourself. Always the hottest news first CamaroNews.com!

Chevrolet’s legendary Camaro is an affordable muscle car that captures the attention of many car enthusiasts, me included; its brawny styling and powerful engines make it a tough combo to beat for its closest archrivals – the Ford Mustang and Dodge Challenger.Arguably I’d consider the current generation car to be the best yet (especially the latest hell-raising Z/28). Yet the new car industry never stays still; so since Ford has an all-new Mustang for 2015, I’ve decided to digitally envisage how the next Camaro could potentially look.Design:First of all, I’ll make no secret that this design was inspired from the latest C7 Corvette. However, I must add, that influence also came from Michael McGee’s Chevrolet Camaro internship project that found its way on online late last year.Beginning at the business end; the face incorporates Chevrolet’s latest corporate design language, with the grille divided into a slim upper opening and larger lower intake for a striking first impression. Slim headlights intersect the long, dynamic hood that sweeps upwards over the ‘C7-like’ front fenders. These same lines then flow into the doors where they link up with the ‘pinched’ shoulders. Below are lower door scallops that lead backwards to the vertical vent slats, paying homage to the current car.The DLO (daylight opening area) is a mix of old infused with new, hence a beltline ‘up-kick’ around the side quarter windows – a styling aspect reminiscent of the 1967 original. Another contemporary design element is the blacked-out windscreen pillars that hark back to the fourth-generation Camaro and newest Corvette.Beyond the rakish cabin, lies hindquarters with wheels pumped outwards at the corners – further emphasising the car’s strong, dynamic stance. While not depicted here, the taillights sit flush under the crisp-edged shoulder-line, while also forming the top-edge of the shapely trunk lid.Interior:While interior design of the Detroit brand’s present pony-car is generally good, there is always room for improvement. Visibility and tactile calibre need to be improved a notch – the former especially with its turret-like glasshouse and thick windscreen pillars.For this concept, I envisage the design envelope to be pushed further with richer detailing and materials. Think about what’s currently found in GM’s latest Cadillac’s, but with much more extravagant, driver-centric cabin styling. If the Mustang’s interior is good, then this should be special.What Could Power It:The next generation’s engine line-up will most like mirror that of its closest competition; so cue the staple 3.6-liter six, and eight cylinder variants, plus a potential fuel sipping, 2.0-liter turbocharged four-cylinder option. Making the most of these engine choices will likely be either an 7-speed manual or an 8-speed automatic, with power fed to the correct end of the car – that being the rear.Don’t expect that 7.0-liter monster from the 2014 Z/28 to return, but rather a new twin-turbo variant of GM’s LT1 6.2-liter V8 – similar to what powers the C7 Corvette. This will serve as ‘the’ halo engine in the Camaro’s weapons cache.Platform & Handling:Goodbye Zeta, and hello Alpha; gone will be the Holden Commodore-based platform of the 5th generation. It will be replaced by the same underpinnings that are found in the Cadillac ATS and future GM vehicles. This platform change is expected to yield benefits in weight, performance and fuel economy (the Zeta platform is known to be a porker). Other handling tricks are likely to come from torque vectoring and magnetic damper control systems, plus other suspension tweaks.The Competition:You’d have to be living under a rock to not know what contenders this car battles against. Back in 1967, it was Chevrolet’s response to the hot-selling Mustang. Since then, the fierce rivalry has continued to this very day. However you also can’t discount Dodge’s equally important Challenger; which has just gone in for cosmetic surgery – and looking better for it. Other opponents from different categories could theoretically include the smaller Subaru BRZ/Scion GT-86 twins, and the upcoming Hyundai Genesis.Expect both coupe and convertible versions to officially appear late next year or in early 2016. However, until then, what do you think of this design proposal? Does tick the right boxes? Tell us your valued feedback in the discussion area below.Source 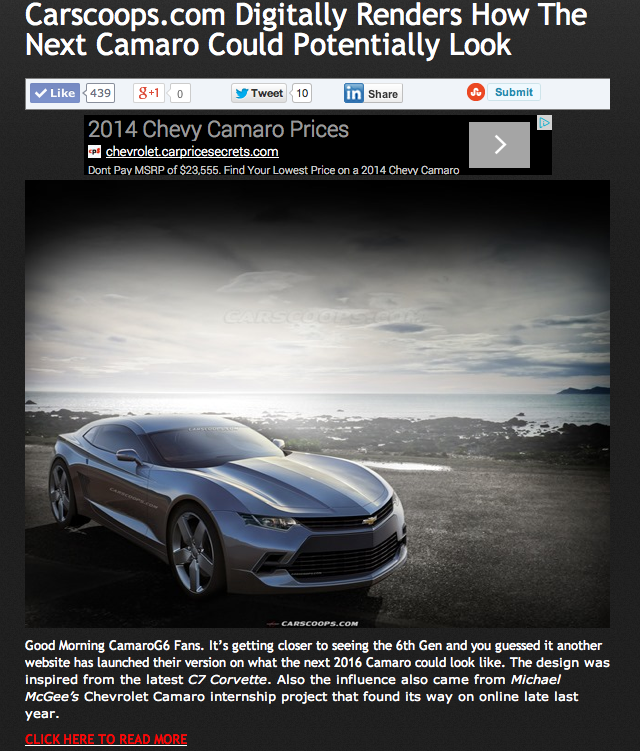