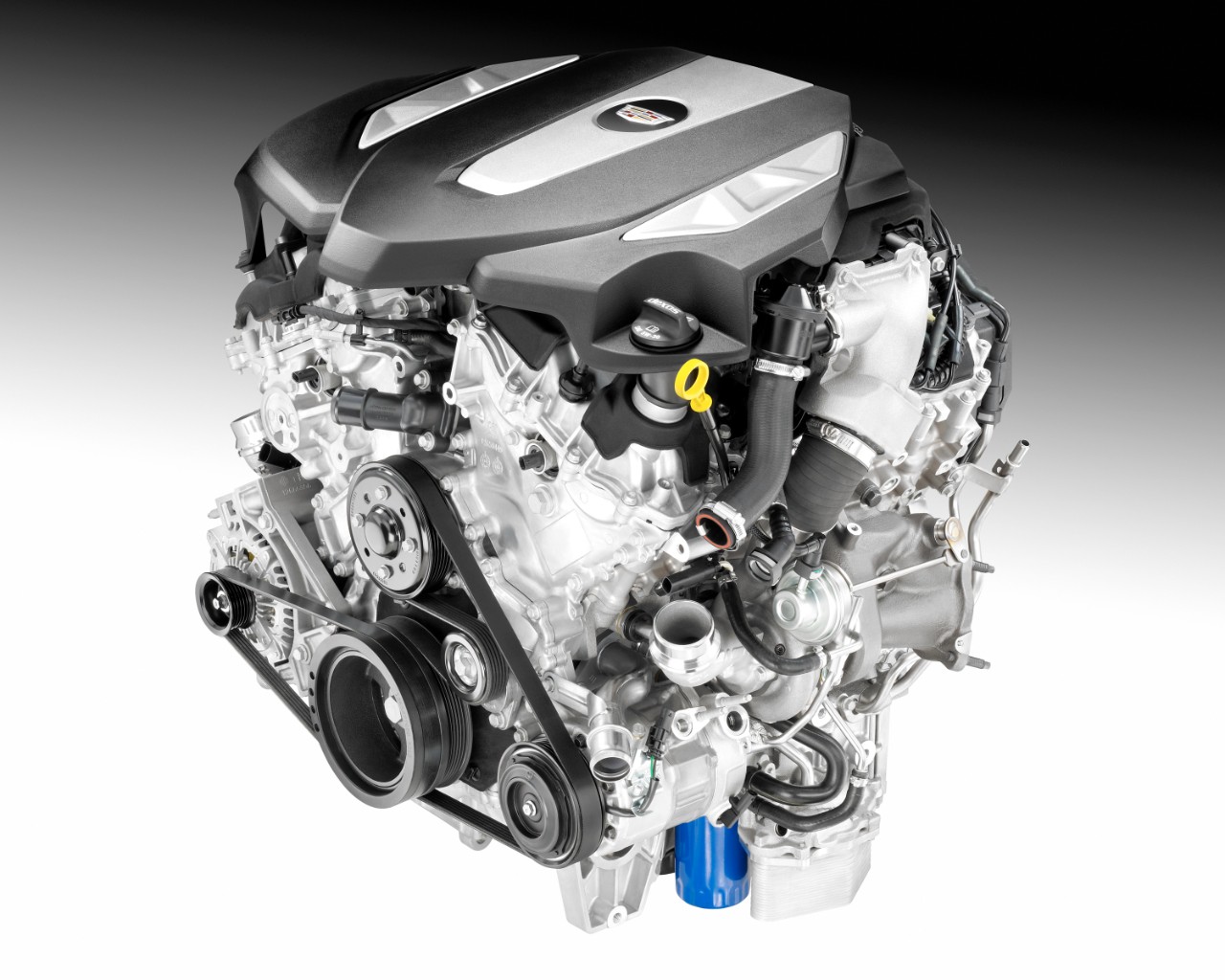 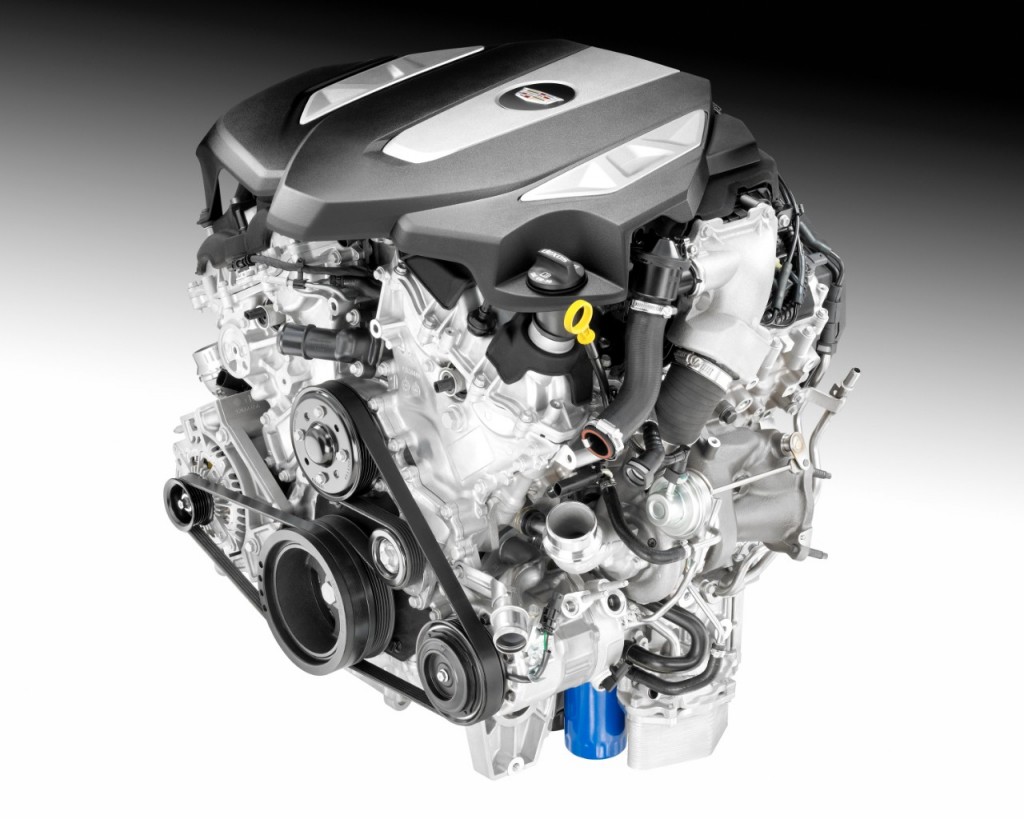 DETROIT – Cadillac today announced a new generation of V-6 engines, led by an exclusive Twin Turbo V-6 that will be one of the industry’s most advanced six-cylinder gasoline engines. It leverages the latest technology to balance efficiency, performance and refinement in the upcoming, top-of-the-range CT6 luxury performance sedan.

The 3.0L Twin Turbo is the only six-cylinder engine to combine turbocharging with cylinder deactivation and stop/start technologies to conserve fuel. Cadillac expects the combination to enhance fuel economy by up to an estimated 6 percent. Cylinder deactivation temporarily deactivates two of the cylinders in light-load driving conditions to enhance efficiency and seamlessly reactivates them when the driver demands full power.

With the stop/start system, the 3.0L Twin Turbo is shut down in certain driving conditions such as stop-and-go city driving to reduce fuel consumption, automatically restarting when the driver takes his or her foot off the brake pedal.

“Cadillac’s elevation on the world stage is driven in great part by its advanced powertrain technology and the all-new 3.0L Twin Turbo powers past the traditional segment leaders with higher degrees of the performance and refinement their reputations were built on,” said Rich Bartlett, assistant chief engineer.

The advanced, low-inertia turbochargers enable the engine to sustain peak torque from 2,500 rpm to 5,000 rpm, giving it a broad torque curve that is conveyed to the driver through a feeling of responsive, sustained power across the entire rpm band.

“Torque is the pulling power of an engine and the new 3.0L Twin Turbo delivers it with confidence-inspiring smoothness and progression,” said Bartlett. “In fact, the potency of the torque across the rpm band is matched only by the satisfaction of the horsepower created as those revs climb quickly to 6,500 rpm.”

Cadillac’s new 3.0L Twin Turbo is part of a new generation of technologically advanced V-6 engines, which includes a new version of the award-winning 3.6L naturally aspirated engine employed for years across the brand’s model range. Each features all-new structural and combustion elements designed to complement higher performance and greater efficiency with exceptional quietness and smoothness.

Features shared by the 3.0L Twin Turbo and 3.6L include:

“This new architecture leverages the best of Cadillac’s proven, awarded V-6 engine technology and takes it farther with a finer focus on refinement and durability to match its benchmark output and efficiency,” said Bartlett.

A more complete look at the architecture, features and attributes of the new V-6 family is available in the 3.6L release.

While the 3.0L Twin Turbo is based on the same, all-new architecture as the naturally aspirated 3.6L V-6, it incorporates specific components and features to support the load and cylinder pressure characteristics unique to a forced-induction engine.

Its 86mm bore specification is about 10 percent smaller than the 3.6L, while both engines share an 85.8mm stroke. The smaller bore reduces the size and consequentially the weight of the pistons in the 3.0L Twin Turbo, making the most of the rotating assembly’s geometry to match the quicker rev capability enabled by the low-inertia turbochargers’ quick spool-up.

“With nearly zero turbo lag and a commensurately low-inertia rotating assembly, this engine climbs the rpm ladder and produces power on demand,” said Bartlett. “Its performance is more than just the maximum output – it’s how it is delivered and the new 3.0L Twin Turbo delivers it with smoothness and precision.”

Additional features unique to the 3.0L Twin Turbo include:

In practical terms, that means the relatively small size of the turbochargers and their lightweight turbines foster more immediate “spooling,” which practically eliminates lag, for an immediate feeling of power delivery. They produce up to 18 pounds of boost (125 kPa).

A single, centrally located throttle body atop the engine controls the air charge from both turbochargers after the temperature is reduced in the intercooler. This efficient design also contributes to more immediate torque response, while reducing complexity by eliminating the need for a pair of throttle bodies.

Unique vacuum-actuated wastegates – one per turbocharger – are used with the Twin Turbo for better management of the engine’s boost pressure and subsequent torque response for smoother, more consistent performance. They are independently controlled on each engine bank to balance the compressors’ output to achieve more precise boost pressure response.

The wastegates also work in concert with vacuum-actuated recirculation valves to eliminate co-surge from the turbos – a condition that can result in dynamic flow reversal, such as the moment immediately after the throttle closes. This overall system integration contributes to the engine’s smoother, more consistent feeling of performance.

With no circuitous heat-exchanger tubing, there is essentially no lag with the response of the turbochargers. Airflow routing volume is reduced by 60 percent when compared with a conventional design that features a remotely mounted heat exchanger.

“It is a very short path from the compressors to the intake ports,” said Bartlett. “The compressors draw their air directly from the inlet box and send their pressurized air through the intercooler immediately for a tremendous feeling of power on demand.”

Both of Cadillac’s new V-6 engines will be produced at GM’s Romulus Powertrain Operations assembly facility, near Detroit, which received a $540-million investment to build the next-generation V-6 engines. 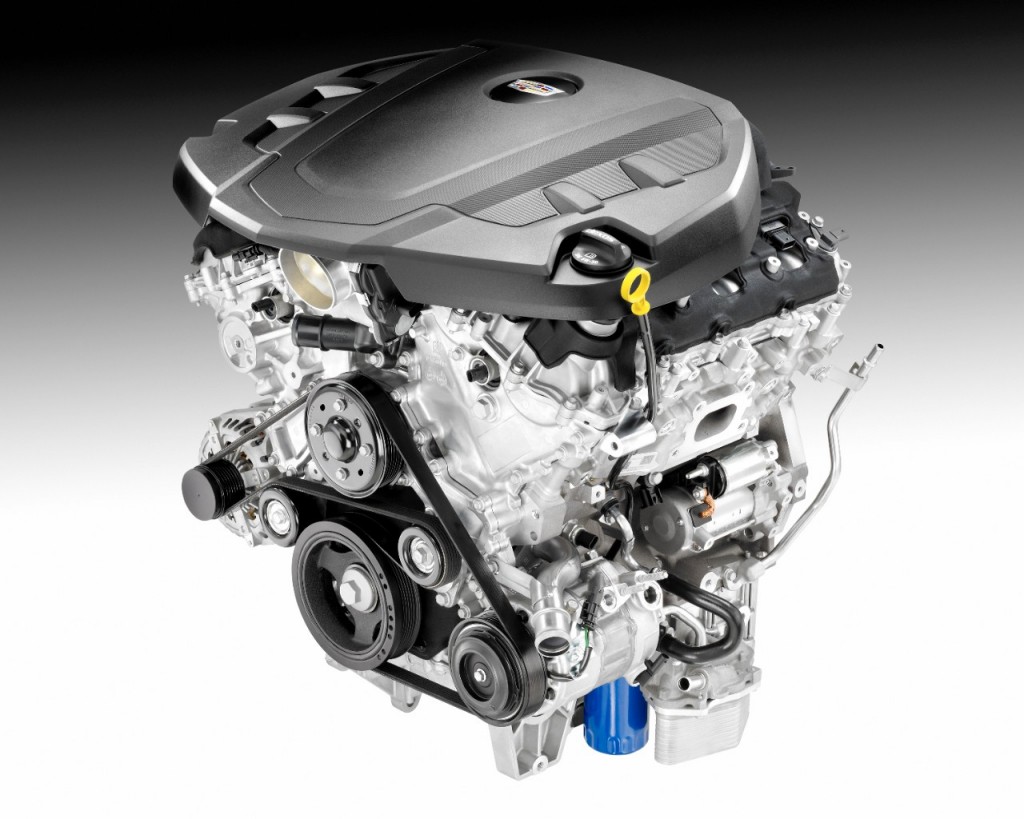 The clean-sheet engine design is the fourth generation of GM’s acclaimed DOHC V-6 engine family and incorporates new features, including Active Fuel Management (cylinder deactivation) and stop/start technology to enhance fuel economy up to a General Motors’-estimated 9 percent when compared to the previous engine.

Noise-reducing features, including an all-new cam drive system, contribute to the new 3.6L being up to 4 dB quieter at idle and under low load driving conditions than the benchmark Infiniti 3.7L V-6.

“This new 3.6L V-6 raises the bar for all naturally aspirated V-6 engines in the industry and perfectly augments the CT6’s new standard for sophistication,” said Ameer Haider, assistant chief engineer for V-6 engines. “It builds on the established strengths of previous Cadillac engines, pushing the technologies to new heights and introducing new ones that take performance, refinement and efficiency to benchmark levels.”

With an efficiency-enhancing stop/start system, the engine is shut down in certain driving conditions such as stop-and-go city driving to reduce fuel consumption, automatically restarting when the driver takes his or her foot off the brake pedal.

“The new 3.6L is designed to deliver peak performance, efficiency and refinement with maximum durability – and minimal maintenance,” said Haider. “Those attributes put it at the forefront of naturally aspirated V-6 engine offered in any luxury car around the world.”

An all-new Hydra-Matic 8L45 paddle-shift eight-speed automatic transmission is paired with the new 3.6L V-6 in the CT6, elevating the CT6’s driving experience with one of the luxury market’s smoothest, quietest and most efficient powertrain combinations.

In addition to the CT6, the 2016 Cadillac ATS and CTS will offer the all-new 3.6L, where they are expected to lead their respective segments in fuel economy and non-boosted V-6 power. Also, a new 3.0L twin-turbocharged engine based on the same architecture will be offered on the CT6.

Structurally, the all-new 3.6L V-6 is similar to the proven, award-winning design of the previous V-6 engines, including an aluminum, deep-skirt cylinder block.

The optimal 60-degree cylinder angle is retained, with the bore size enlarged from 94mm to 95mm and the bore centers stretched from 103mm to 106mm. The cylinder block features six-bolt main bearing caps and inter-bay breather vents that enhance power and oil flow management.

The crankshaft is forged from 1538MV steel and inherently stiffer than a conventional cast-iron crankshaft, contributing significantly to the engine’s smoothness, quietness and durability.

Attached to the crankshaft are high-strength connecting rods and pistons. The rods are sinter-forged and composed of a high-copper alloy that stands up to high heat and resists bending, while the polymer-coated hypereutectic pistons are designed to minimize friction, allowing for a tighter piston-to-bore clearance that results in quieter operation.

The new 3.6L V-6 also incorporates oil-spray piston cooling, which helps reduce noise, lower combustion temperatures and enhance durability by drenching the underside of each piston and the surrounding cylinder wall in an extra layer of cooling, friction-reducing engine oil.

Camshaft phasing allows the greatest variances in valve timing to make the most of power and efficiency. The new 3.6L V-6 engine takes that technology to the next level with intermediate park technology for the intake camshaft phasers.

Because optimal part-load efficiency requires retarding the intake cams to reduce pumping losses, the effect also reduces the effective compression ratio, which affects the engine’s cold-start performance. Conventional cam phasing system authority is limited by how far the intake cams can be retarded in the parked position without affecting cold starting.

Intermediate park technology, which incorporates an intermediate-lock intake variable valve timing cam phaser, allows the cams to be parked at the most favorable position for cold starting, while expanding the amount of intake cam retard for other conditions by adding another 20 degrees of intake phaser authority. This enhances fuel efficiency and reduces emissions.

Unlike conventional systems, which force coolant flow from the front of the block to the back, the new 3.6L’s patented targeted cooling system sends coolant simultaneously to each water jacket in the heads and block.

This new, parallel-flow design maximizes heat extraction in the area of the upper deck, intake and exhaust valve bridges in the heads and integrated exhaust manifold with a minimal amount of coolant. The result is more even and consistent cooling, which enhances performance, and faster engine warmup, which improves cold-start efficiency and reduces emissions.

Additionally, the strategic sizing of the coolant jackets in the head and the block reduces the cooling system thermal inertia, allowing the use of a smaller water pump, which requires about 50 percent less power to drive, enhancing fuel efficiency and even allowing a lower overall height of the cylinder block.

An all-new cylinder head design builds on the airflow attributes of the current V-6, supporting a broader power band that ensures excellent low-rpm torque, for strong power at take-off, and excellent airflow at high-rpm, for greater horsepower.

Engineers achieved that through increased in-cylinder mixture motion, a faster burn rate of the air-fuel mixture and attributes that took full advantage of the new intermediate park cam phasing system.

The all-new 3.6L V-6 continues to employ direct fuel injection to make the most of efficiency and performance. Along with the placement of the fuel injector in the combustion chamber, the piston top is carefully shaped to promote a through mix of the air and fuel, and direct the fuel spray to ensure a more complete combustion.

Active Fuel Management, also known as cylinder deactivation, imperceptibly shuts down the No. 2 and No. 5 cylinders in certain light-load driving conditions to save fuel.

A number of new and enhanced features are designed to make the all-new 3.6L V-6 one of the industry’s quietest, smoothest and most durable engines: